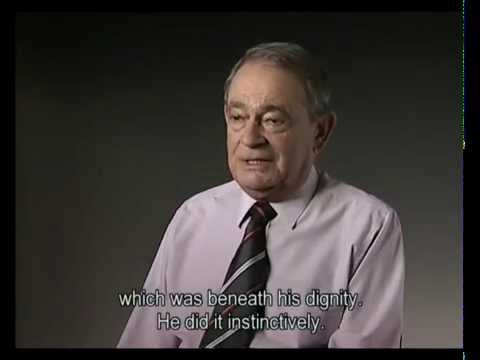 Roman Frister was born in 1928 in the town of Bielsko, Silesia, the only child of a bourgeois, well-off family.  Roman was given a multi-cultural education, with access to books in German, Polish and English. His parents had intended to send him to a prestigious boarding school in London straight after his Bar Mitzvah.

When the war broke out, Roman’s family lived under an assumed identity thanks to forged identity papers that Polish friends of his father’s managed to obtain for them.  When the Jews were forced into the Bielsko ghetto, the Fristers stayed at home, but eventually had to move to Krakow, where they continued to use their forged papers.

Roman, who looked “Aryan”, felt secure walking on the streets of Krakow while all the city’s Jews, including his own grandparents, had been forced to move into the ghetto.  The 13-year-old Roman decided that he would find a way to smuggle his grandparents out of the ghetto. After monitoring the daily running of the ghetto, he managed to sneak inside bringing with him the clothes of a priest, a nun and a novice.  He found his grandparents, who were astonished to see him.  After much argument, Roman convinced them to exit the ghetto with him dressed up in the garments he had brought.  Roman’s act of rescue granted his grandparents a few more months of life:  on discovering them hiding in a village, the Nazis murdered them.

Roman and his parents were eventually caught after they were betrayed.  His mother was murdered in front of him in the Krakow prison, and he was deported with his father to several camps, including Plaszow and Auschwitz-Birkenau.  “Chance played a major role in my survival,” relates Frister “As long as I knew how to take my chance when it arose. Once, I was caught while in a camp.  The SS man drew his gun, but the bullet got stuck in the barrel.  Chance, right? But if I had stood around until he reloaded, he would have shot me.  I ran, thus helping chance to help me.  This is a trait that characterizes me till today,” he said in an interview with “Yediot Aharonot” in 1993.  In another incident, Frister stole a prisoner’s cap after his own was taken, thus buying his life at the price of another Jew’s death. “If human life is the ultimate value, shouldn’t one do everything possible to stay alive, even at the cost of another’s life? Who can judge whose life was more important?  My life is worth more to me than the life of anyone else.  I’m not holy.  I knew that if I didn’t do it, I’d die.  Even today, I think I did the right thing.”

In 1957, Roman immigrated to Israel and entered the world of the media.  He was a journalist for the Ha’aretz newspaper for many years, lectured in journalism at the university and wrote several books.  One of them, “The Cap:  The Price of a Life”, is an autobiographical account.

In his book, Roman recalls his father’s dying words, spoken as he lay on his bunk in the Plaszow labor camp:  “…I only ask one thing. Just one. That you be a human being. A fair person. That you don’t take the morality of the camps with you into your new life. That you don’t adopt the laws of the jungle. That you forget what you acquired here.  The necessity to lie and cheat and hurt others. The contempt for law and honesty. And promise me that you will never – you hear – never steal.”

Roman Frister will be laid to rest on Wednesday, 11 February 2015 in the Jewish cemetery in Warsaw.