A Virtual Tour into the Past 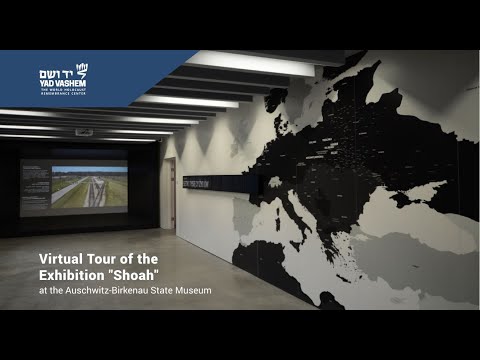 On 27 January 1945, Soviet troops arrived at the "gates of hell." They could never have imagined the atrocities the Nazis had committed against other human beings during the Second World War. While the Red Army had already liberated other camps, such as Majdanek in July 1944, the scale of what they discovered in Auschwitz shook them to their core. So horrific were the scenes they uncovered, they quickly requested filming equipment to record the sights for the world to witness for themselves.

Some 1.1 million Jewish men, women and children were murdered by the German Nazis in the Auschwitz-Birkenau complex, which was both a concentration and an extermination camp. The systematic and industrialized murder that took place at Auschwitz had a very specific purpose: to annihilate as many Jews as possible. This was a part of the larger Nazi plan to completely wipe out the Jewish nation, culture and history from the face of the earth.

Over the years since liberation, Auschwitz-Birkenau has become a symbol of humanity's capability for pure evil. The camp represents a rift in human morality that was left unchecked – a crime that must never be forgotten and serve as a warning forever.

In 2013, Yad Vashem, the World Holocaust Remembrance Center, inaugurated the permanent exhibition "Shoah" in Block 27, the Jewish Pavilion located on the site of the former concentration camp Auschwitz I. This is a story of what humans did to one another. It is a story that must be told and remembered for all time: the story of the Shoah.

As the world prepares to mark the International Day of Commemoration for Victims of the Holocaust coinciding with the 76th anniversary of the liberation of Auschwitz-Birkenau, Yad Vashem has provided the public with a unique virtual guided tour of "Shoah."

Before the debut of the tour, Orit Margaliot, Head of Training, Professional Development and Curricula Development in the Guiding Department at Yad Vashem's International School for Holocaust Studies, gave some insights to the exhibition. Orit helped develop many of the pedagogical tools used by guides both at Yad Vashem in Jerusalem and at Block 27 in Auschwitz-Birkenau. She has guided a large number youth delegations as well as educators through Auschwitz and other authentic sites, where the systematic and widescale murder of the Jews of Europe and North Africa took place.

What is the significance of the virtual tour of "Shoah" at Block 27?

First, as the world is in the grips of the current health crisis, all but paralyzing international travel and causing the temporary closures of museum and other sites, and while Holocaust denial and distortion is sadly again rearing its ugly head worldwide, Yad Vashem felt it important to develop ways for the public to visit the authentic sites where six million Jews were so cruelly murdered during the Holocaust. The virtual platform offers a great opportunity to do so.

In the years before Covid-19, nearly two million visitors toured the Auschwitz-Birkenau Memorial Museum annually. However, most of them only visited the former concentration and extermination camp, hearing the stories of the prisoners of the former camp and the victims whose fate led them directly to the crematories. They left the museum often not comprehending the whole story of the Holocaust – Why did it happen? Who instigated it? Why were Jews targeted? How did they cope with the ever-tightening noose of Nazi persecution? – which is an essential element in fully grasping this unprecedented event in human history. Therefore, Yad Vashem chose to offer this virtual tour of "Shoah," which succinctly and clearly explains all of the elements above, and more.

How does the fact that Block 27 is located within the complex of Auschwitz-Birkenau change or influence the content and direction of the exhibit and its design?

"Shoah" was designed in Block 27 specifically because it is situated on the grounds of the former concentration camp. There was a conscious decision to keep the outer walls of the block untouched, in contrast with what is experienced inside. The juxtaposition of the evolution and ideology of the Nazi German campaign against the Jews on the backdrop of the actual site where its policies were implemented is both significant and chilling.

In addition, the name of the exhibition, "Shoah," and not the technical term "Holocaust," speaks volumes to the message we are trying to convey and the need to differentiate the Shoah from other genocides and mass murder events through history. This exhibition brings several focal points to light, enabling visitors to understand further the scope, causes and meanings of the Holocaust, of which Auschwitz has become the symbol – but is just one element of the larger picture.

How does "Shoah" compare to Yad Vashem's Holocaust History Museum in Jerusalem?

There is a stark contrast between the Holocaust History Museum on the Mount of Remembrance in Jerusalem and "Shoah" in Block 27 on the site of the former concentration camp. ,"Shoah" follows a thematic approach, as opposed to the chronological history of the Holocaust told at the Holocaust History Museum. Nevertheless, both exhibitions tell the story of what happened through from the perspective of the Jewish individual victims, who hailed from across Europe and North Africa.

What are the most impactful and moving elements of "Shoah," and how are these reflected in Yad Vashem's pedagogical approach?

It's been seven years since "Shoah" opened to the public. Over the years, we have seen how the different displays in the exhibition have impacted visitors and their understanding of the Holocaust. I would like to note three of the rooms that in my opinion touch many of the visitors and correlate directly to our unique educational approach. The first is the montage of prewar Jewish life, which depicts European and North African Jewry going about in their daily life – school, jobs, summer holidays and happy occasions, such as weddings. The viewer sees them as ordinary people like themselves, and not as humiliated and anonymous victims.

The second is the Michal's Rovner depiction "Traces of Life," which represents the 1.5 million Jewish children murdered during the Holocaust.  The choice to present them through the drawings they left behind and not through images of death illustrates "the presence of the absence and the absence of the present."

However, if I had to say which element of the exhibition has perhaps the greatest impact on visitors, I believe it would be the Book of Names. This seven-meter-long creation comprising thousands of pages two meters high contains the names of 4,300,000 victims of the Holocaust. The names were taken from Yad Vashem's Central Database of Shoah Victims' Names, which were gleaned from Pages of Testimony as well as community and deportation lists. Since the opening of "Shoah" in 2013, Yad Vashem has added some 500,000 names to its Names Database.

The book ends with some empty pages to represent those names still to be gathered, as well as a verse from the Book of Psalms, chapter 139 verse 16: “And in your book they will all be written."

Come and tour "Shoah" in Block 27, the Jewish Pavilion in Auschwitz-Birkenau together with Yad Vashem and learn about the Holocaust, the victims, and those who survived. Visit Yad Vashem's comprehensive website available in eight languages.