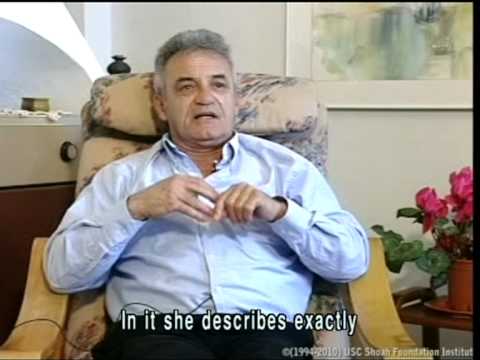 by Righteous Among the Nations in the Warsaw Zoo: Moshe Tirosh’s testimony
Testimony

By the 1930's the Warsaw Zoo had become one of Europe's largest zoos. Its expanded area housed many animals. This prosperity was, however, short lived. When World War II broke out extensive parts of the zoo were destroyed in the bombings, many animals were killed, and others, including the zoo's special attraction – the elephant Tuzinka – were taken to Germany.

Dr. Jan Zabinski was the director of the zoo. He was the author of many popular-knowledge books about biology and the psychology of animals, as well as the producer of a number of very popular radio-shows. Despite the enormous problems he faced as the director of a zoo during wartime, he was not blind to the suffering of the Jews. When the Warsaw ghetto was established Jan and his wife, Antonina, began helping their Jewish friends. As an employee of the Warsaw municipality he was allowed to enter the ghetto. Under the pretext of supervising the trees and small public garden within the ghetto area, he visited his Jewish acquaintances and helped them as best as he could. As the situation in the ghetto deteriorated, he offered them shelter.

“Dr. Zabinski, with exceptional modesty and without any self-interest, occupied himself with the fates of his prewar Jewish suppliers... different acquaintances as well as strangers,” wrote Irena Meizel. She added: “He helped them get over to Aryan side, provided them with indispensable personal documents, looked for accommodations, and when necessary hid them at his villa or on the zoo’s grounds.” Regina Koenigstein described Zabinski's home as a modern "Noah's ark". According to the testimonies, many Jews found temporary shelter in the zoo’s abandoned animal cells, until they were able to relocate to permanent places of refuge elsewhere. In addition, close to a dozen Jews were sheltered in Zabinski's two-story private home on the zoo's grounds. In this dangerous undertaking he was helped by his wife, Antonina, a recognized author, and their young son, Ryszard, who supplied food and looked after the needs of the many distraught Jews in their care.

Rachel Auerbach, who took part in the attempts to create a clandestine ghetto archive and who played an important role in documenting the story of the Warsaw ghetto, was in contact with Zabinski all through that period. After the ghetto was liquidated, she went into hiding and continued to work on her diary, recording events for posterity. As the front came closer to Warsaw, she gave one of her notebooks to Zabinski. He put it in a glass jar and buried it in the zoo grounds. In April 1945 Rachel Auerbach was able to retrieve her manuscript and publish it.

An active member of the Polish underground Armia Krajowa (Home Army), Zabinski participated in the Polish uprising in Warsaw of August and September 1944. Upon its suppression, he was taken as a prisoner to Germany. His wife continued his work, looking after the needs of some of the Jews left behind in the ruins of the city. Jan wrote in his own testimony explaining his motives: “I do not belong to any party, and no party program was my guide during the occupation... I am a Pole – a democrat. My deeds were and are a consequence of a certain psychological composition, a result of progressive-humanistic upbringing, which I received at home as well as in Kreczmar High School. Many times I wished to analyze the causes for dislike for Jews and I could not find any, besides artificially formed ones.”

On September 21, 1965, Yad Vashem recognized Jan Zabinski and his wife, Antonina Zabinska, as Righteous Among the Nations. On October 30, 1968 Dr. Jan Zabinski planted a tree on the Mount of Remembrance.

The Encyclopedia of the Righteous among the Nations Editors: Sara Bender and Shmuel Krakowski
$87.00
Buy Now