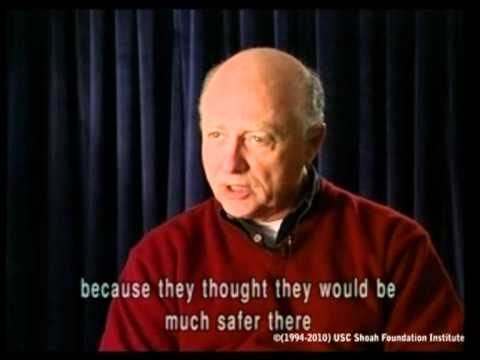 Three Boys in the Studite Monastery

Uniow (Univ) is a small village, Tarnopol district today in Ukraine. We know that during the war Jews were hidden in the village both in the schoolhouse and the monastery. Clara Safran, her young son Roald, her brother Samuel Rosen and  his wife Josefina, were hidden by the Dyuk family in the schoolhouse. Because of the need of secrecy, they probably were not aware that not far from their dark and small hiding place, there were also three Jewish children hidden in the monastery.

The orphanage was in the Monastery of the Assumption of the Virgin Mary in Uniow that belonged to the Studite order, headed by Arhcimandrite Klement Sheptytskyi (recognized as Righteous among the Nations). The three children were brought to Uniow and put in the care of the head of the orphanage Hieromonk [a priest who is also a monk in the Eastern Churches] Daniil Tymchyna. Tymchyna knew that the three children were Jewish and carefully instructed them how to hide their Jewish identity. They were warned not to take showers with the other boys and were given Ukrainian names. They were baptized, but the Hieromonk explained to them that it was only a formal act for their protection.

The Soviet army liberated the area in 1944. With Western Ukraine under Soviet control, Stalin ordered the entire Ukrainian Catholic hierarchy imprisoned. Hieromonk Daniil was arrested in 1947 and was sentenced to ten years of forced labor in Siberia. He died in 1972.

The three boys that were saved by Hieromond Daniil in the monastery in the small village represent three life stories, very different from each other. They were born in places far apart; fate brought them together in Uniow; and after the war went their separate ways, rebuilding their lives in three continents  – in Israel, the United States and Poland.

Oded Amarant was born in Tel Aviv in 1935. His parents had immigrated to the Land of Israel from Poland several years earlier, and when Oded was four years old, his mother went to visit her parents and took the child along to meet the family. Not knowing that soon the war would separate them, his mother returned to Tel Aviv, and left her son with her parents who were to join her soon in the Land of Israel. When the war broke out, the grandparents took Oded Amarant and fled to Lwow. Their efforts to leave for Palestine failed, and in 1941 the city was occupied by the Germans. Amarant’s uncle brought him to the Uniate Church, and thus his life was saved. The remaining family were all killed. After the war Oded was returned to his family in Tel Aviv.

Adam Daniel Rotfeld was born in Przemyslany, Poland, in 1938. One of the monks brought him to the orphanage in the Studite monastery in Uniow. He was given a false name, Danylo Charevynsky, and stayed in the orphanage for the entire period of the German occupation. From his entire family, only his sister, Alicja, survived the Holocaust. After the war Rotfeld stayed in Poland, pursued a career as a researcher; in the years 1991 to 2002 he served as Director of the Stockholm Institute of Peace Research; and in 2005 was Poland's Minister of Foreign Affairs.

Leon Chameides was born in Katowice, Poland, in 1935. When the Germans invaded Poland his family fled to the Lwow area. Sometime in 1942, a year after the German occupation of Lwow, his father, in the hope of saving his son, left him at the Holy Jur Church. The monks took him first to an orphanage in Brzuchowice, and finally to Uniow, where he was hidden until the German retreated. When the area was liberated by the Soviets in 1944, he was taken by another Jewish survivor back to Poland, and in 1945 his maternal grandparents and an uncle who had managed to flee to England arranged for Leon and the woman who took care of him to join them. Four years later they received a visa for the United States and arrived in America in June 1949.

On 31 December 2008 Hieromonk Daniil Tymchyna was recognized as Righteous Among the Nations.