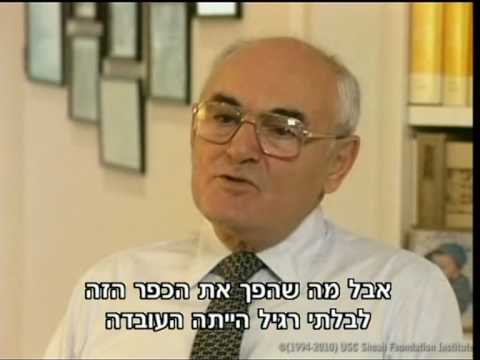 Magda Trocmé plants a tree in her and her husband’s honor, Yad Vashem

Magda Trocmé next to the tree planted in her and her husband’s honor, Yad Vashem

Magda Trocmé and survivors, next to the tree in the Avenue of the Righteous, Yad Vashem

Magda Trocmé and survivors, with their wartime photos are inserted at the top of the photo

The Village of Le Chambon-sur-Lignon

Pastor André Trocmé was the spiritual leader of the Protestant congregation in the village of Le Chambon sur Lignon in the département of Haute-Loire in Southeastern France. His predecessor, Charles Guillon, had been elected mayor of the town in the early 1930s, and André Trocmé took over as spiritual leader of the congregation. When in June 1940 France was occupied and the Vichy regime was formed, Trocmé urged his congregants to shelter persecuted fugitives of “the people of the Bible.” In so doing, he followed in the footsteps of Guillon, who had educated the congregation in this spirit. This policy and the generosity of spirit of many congregants made Le Chambon and the surrounding villages a unique refuge in France, where many Jews, children and entire families, survived the war.

When the deportations began in France in 1942, Trocmé urged his congregation to give shelter to any Jew who should ask for it. The village and its outlying areas were quickly filled with hundreds of Jews. Some of them found permanent shelter in the hilly region of Le Chambon, and others were given temporary asylum until they were able to escape across the border, mostly to Switzerland. Despite the danger, Jews were housed with local townspeople and farmers, in public institutions and children’s homes. With the help of the inhabitants some Jews were then taken on dangerous treks to the Swiss border. The entire community banded together to rescue Jews, viewing it as their Christian obligation.

According to one estimate, some 5,000 Jews passed through Le Chambon and the surrounding villages until liberation. The people of Chambon acted on their conviction that it was their duty to help their "neighbors" in need. Many factors joined in the creation of this spirit: the Protestant history of persecution as a religious minority in Catholic France; empathy for Jews as the people of the Old Testament and a shared biblical heritage; and last but not least, the powerful leadership and example of their pastor and his wife, Andre and Magda Trocme.

Magda, Trocmé’s wife, was actively involved in creating and maintaining this haven for the persecuted Jews. She located families willing to accommodate Jewish refugees and prepared the town’s many residential schools for increased enrollment. Many people were actively involved in this work. Community activists reported to the railroad station to receive the arriving refugees, they would then be housed by the villagers or taken to safe places. All these endeavors which frustrated the regime’s anti-Jewish policies were implemented under the sponsorship and encouragement of Pastor Trocmé.

The Vichy authorities suspected what was taking place; it was after all impossible to hide such wide-scale rescue activities over time. The authorities demanded that the pastor cease his activities. His response was clear-cut:

"These people came here for help and for shelter. I am their shepherd. A shepherd does not forsake his flock... I do not know what a Jew is. I know only human beings."

Neither the authorities’ pressure nor the security agents’ searches diminished the resolve of the Trocmés and their team, and their activity did not cease. On August 15, 1942, Trocmé vehemently articulated his opinions to Georges Lamirand, a minister in the Vichy government on an official visit to the small town. Several days later, gendarmes moved into Le Chambon to “purge” the town of its “illegal” alien residents. Two weeks later, on August 30, the suspense climaxed with rumors of an arrest warrant issued against the minister. In his overflowing church, Trocmé urged the congregants to “do the will of God, not of men” and stressed the importance of fulfilling the commandment in Deuteronomy 19:2-10 concerning the entitlement of the persecuted to shelter. There were no arrests that day, and several days later the gendarmes were withdrawn from town, their mission an utter failure.

In February 1943, Trocmé and two colleagues – the Reverend Edouard Theis and the teacher Roger Darcissac – were arrested and interned at the Saint-Paul d’Eyjeaux camp near Limoges. Trocmé was held for five weeks, while the camp commander tried to pressure him to sign a commitment to obey all government orders. The minister did not succumb to the pressure but after his release he was forced to go underground. But even in his absence, did not deter the residents of Le Chambon. They were united in fulfilling a supreme moral command. They continued Pastor Trocmé's legacy by welcoming the persecuted Jews into their homes, enabling many Jews to live in relative calm until the end of the war.

On January 5, 1971, Yad Vashem recognized the Reverend André Trocmé and on May 14, 1984 his wife, Magda, as Righteous Among the Nations. 32 other residents of Le Chambon sur Lignon were awarded the title, and in 1990 Yad Vashem presented the village with a special diploma of honor in tribute of their humane conduct during the war.

Andre Trocmé was not the only member of his family to rescue Jews. Daniel Trocmé, his nephew, taught physics, chemistry and natural sciences at Les Roches, an old, prestigious Protestant boarding school in Verneuil, in the département of Eure. In 1941, his uncle, Pastor André Trocmé, asked him to become the principal of Les Grillons, a boarding school for Jewish refugee children established by the American Friends Service Committee (the Quakers), in Le Chambon-sur-Lignon. A determined and stern-looking man, he had sublimely humane traits. Jonathan Gali, who at age sixteen found shelter and work at Les Grillons, recalls a fascinating and profoundly cultivated person.  “Daniel Trocmé never thought of himself.  He was deeply conscientious. At night you might find the director working by a dim nightlight, repairing children’s shoes with bits of rubber tire.” On winter mornings, Trocmé cooked soup in a large metal pot. Although suffering from heart disease, he loaded the soup for the pupils’ lunch onto a wheelbarrow and pushed it for two kilometers over a steep track. At bedtime, Trocmé read the youngsters stories, which he then discussed with them at length.

After several months, Daniel Trocmé was offered to take the position of principal of the school of La Maison des Roches. There too he continued his rescue activity. On June 29, 1943, the Gestapo raided the school in search for Jewish students and the director. Trocmé was not on the grounds, because he had spent the night in Les Grillons. Although he could have fled, he chose to return and joined his Jewish students. Under threat of the German submachine guns, Trocmé and eighteen of his students were imprisoned in the town of Moulins. During his confinement, Trocmé continued to show courage and determination, bolstering the spirits of the students interned with him. Trocmé was taken to the Gestapo headquarters in Moulins for interrogation and, when accused of protecting a Jewish sixteen-year-old, he explained that he was only protecting the downtrodden. In August 1943, Trocmé was sent to the detention camp in Compiègne in France; from there he was deported to the camp of Dora.  In the beginning of 1944 he was taken in a “transport of the sick” to Majdanek, where he died in April 1944 of exhaustion and sickness.  He was just thirty-four-years old.

On March 18, 1976, Yad Vashem recognized Daniel Trocmé as Righteous Among the Nations.