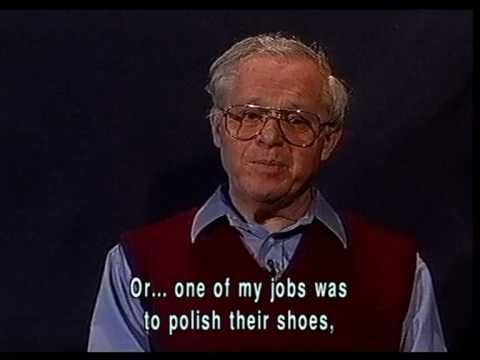 A Tale of Two French Butchers

Dr. Ehud Loeb was born in 1934 as Herbert Odenheimer in Buehl, Germany. During the Holocaust his family was deported to France; from there his parents were sent to Auschwitz where they perished. Dr. Loeb survived as a child in hiding. Ehud Loeb today lives in Jerusalem and is a member of the Commission for the Designation of the Righteous Among the Nations. He feels that as someone who was saved, it is his duty to contribute in some way to rewarding those who helped the Jews.

All Commission members are volunteers; most of them are Holocaust survivors who devote great efforts to honor rescuers and to search within the nations that were involved in the terrible tragedy that befell them and their families for the few who stood by the Jewish people. It is natural that exploring the cases and the circumstances of the rescue acts often brings back painful memories from the time of the Holocaust.

One of the most emotional moments for Ehud Loeb was in July 2006, when the Commission discussed the file of Esther and Roger Perret. Seemingly it was a file like many others – a survivor requesting Yad Vashem to recognize Esther and Roger Perret, his rescuers, as Righteous Among the Nations. But it was the name of the town where the rescue took place that caught Dr. Loeb's eye. It was Buzancais, where he himself had been in hiding. Dr. Loeb’s rescuers, Jeanne and Jules Roger had been recognized as Righteous in 1989. Here now was another case of rescue that took place in the same town. Surprisingly, Roger Perret too – like Loeb’s own rescuer – was a butcher.

After the Commission decided to bestow the title of Righteous on Esther and Roger Perret, Dr. Loeb decided to travel to France and to attend the ceremony where Claude Marx’ rescuers were posthumously honored. His meeting with Claude Marx was very emotional, and they have since formed a strong friendship. As it turned out, both of them were of the same age and although they didn’t know each other, they shared a similar past. From the rescuers’ families they learned that their rescuers had known each other. This was no surprise, considering that the two were butchers in a small town of a couple of thousand inhabitants. It is very possible that the two butchers met each other from time to time during the war years. At these meetings they probably talked about the hardship of wartime, the prices of meat, and told each other about their families. But there seems to be one topic that they never shared with each other – neither one ever mentioned to the other that he was hiding a young Jewish boy at his home.

But the story didn’t end there. There was another person to whom Dr. Loeb owed his life, and it was only years later that he had gathered all the information and submitted her case to the Commission for the Designation of the Righteous, requesting that the title be also bestowed on Jules Roger’s mother, Louise Roger. The ceremony honoring her took place on 27 October 2009. Her son and grandson came to Yad Vashem to receive the award honoring Louise Roger and to see the names of Jules and Jeanne Roger on the wall of honor in the Garden of the Righteous.

Ehud Loeb once described his childhood as a film. He remembers flashes - some most traumatic, others highly emotional. It is the story of a child who was torn first from his home in Germany, who was then incarcerated in a terrible camp where he was victimized, witnessed great suffering and saw his beloved grandmother die; he was consequently separated from his family, put in institutions and with strangers, moved again and again from one place to another. It is the story of a child who at a very young age realized that he was the target of a systematic manhunt, who for several years lived in constant fear of being caught, who learned to switch names, identities and languages.

Born as Herbert Odenheimer in Buehl, Baden, Germany, in 1934, Ehud was the last Jewish child born in the community that ceased to exist six years later. He remembers being plagued by the neighbors’ children. When he was four years old, during Kristallnacht, the synagogue was set on fire and the mob attacked the family home. Two years later, in October 1940, when he was six years old, the remaining 26 Jews of Buehl and all the Jews of Baden were deported to the South of France and put in the Gurs detention camp, close to the Spanish border. Conditions in the overcrowded camp were terrible. There was a constant shortage of water, food and clothing; the barracks where the inmates were housed were primitive and lacked basic facilities; sanitary conditions were deficient and the camp was plagued by epidemics. Hundreds of inmates died of typhoid fever and dysentery, among them Ehud's grandmother. In February 1941, the Jewish aid organization for children, OSE, managed to take Ehud and other children out of the camp. Agreeing to part from their only son and to trust strangers to take care of him was probably the hardest decisions parents could take. They never heard or saw their child again. A year and a half later, in the summer of 1942, Hugo and Julchen Odenheimer were deported to Auschwitz where they perished.

Herbert’s name was changed to a French name – Hubert Odet – and he had to shed his former identity, to learn French and become a French child. His new name was Hubert. He spent the first months in a children’s home in Chabannes, suffering immensely from the separation from his parents. The OSE moved him from one institution to another, always under the fear of being caught. In late 1942 after the roundups of Jews were intensified, it was decided it would be safer to place the children with families. The first family treated him very badly. Herbert - now Hubert - did not complain and tried to be obedient, but when the OSE social workers came to see him they decided to move him immediately to another family - to the home of Jules and Jeanne Roger in Buzancais.

Jules Roger was a butcher and an active member of the resistance. Although they had a ten-year-old son, the couple opened their home to fugitive underground members and Jews. The underground used Rogers’ home to hide weapons and documents, and, frequently, to shelter operatives. Hiding a Jewish child therefore put them in even greater danger. Food was rationed and the family shared what they had with their wards. In order to buy extra provisions Madame Roger took on ironing. The Rogers displayed exemplary devotion to their wards. They spared no effort to alleviate the children’s distress of being separated from their parents.

With the Roger family Ehud had finally found a warm and welcoming home, but this was not to last. When the situation became dangerous, he would be moved to different places for several weeks, before being returned to the Roger's house. In late 1943, when informers threatened to denounce Jules Roger, Ehud was taken to Roger’s mother, Louise Roger, in Argy, a small adjacent village. There he lived on the grandmother’s farm, tended the goats, enrolled at school, and -- to hide his Jewish identity -- Ehud-Hubert became an altar boy. He wanted to be Catholic like all his friends, but the Rogers explained that he must not deny his origins, but rather be proud of them. After the war he was returned to the Roger family, where he stayed until he was put in charge of the Jewish welfare organizations.

Ehud was put in a children's home. The war was over and the children were waiting for their parents or relatives to come and get them. Every day children left accompanied by family, but no one came for Ehud. Later he learned that his mother had been deported on 4 September 1942 to Auschwitz, and his father was put on a transport three days later. Both perished. In 1946 Ehud was sent to distant relatives in Switzerland. He had to re-learn his mother tongue – German, and his family name was changed - again - to Loeb. When he emigrated to Israel he adopted a Hebrew name: Ehud Loeb.

Yad Vashem knows of another child that was hid by the Rogers. Léopold Lazare was four years old when he found shelter with the Rogers after his family had been sent to Buchenwald and the OSE had removed him from the Rivesaltes camp. Lazare lived with the Rogers until the end of the occupation. He regarded the Rogers as his parents, and was reluctant to part with them when his parents reclaimed him after the war.

On May 7, 1989, Yad Vashem recognized Jules and Jeanne Roger as Righteous Among the Nations.

On December 7, 2008, Yad Vashem recognized Louise Roger as Righteous Among the Nations.

The Marx family were Jewish refugees from Nancy, who came to Buzancais in 1940. Justin Marx was a butcher and found employment at the town's slaughter-house. The family befriended their neighbors – Esther and Roger Perret. In 1943 the French policemen warned the Jews in Buzancais that a roundup was planned. The Marx family escaped to the villages in the town's vicinity, but their young son, Claude, who was nine years old at the time, stayed with the Perret family. The family arranged a hidden space for him in the attic. From his shelter he heard the police arriving at night in the next house, which used to be his family's home, and their knocking on the door. Claude stayed with the Perret family until liberation.

On July 10, 2006, Yad Vashem recognized Esther and Roger Perret as Righteous Among the Nations.