Jaroslavas Rakevičius and his sons Česlovas, Juozas, Zenonas and Algimantas
Jonas and Ona Mozūraitis, and their children 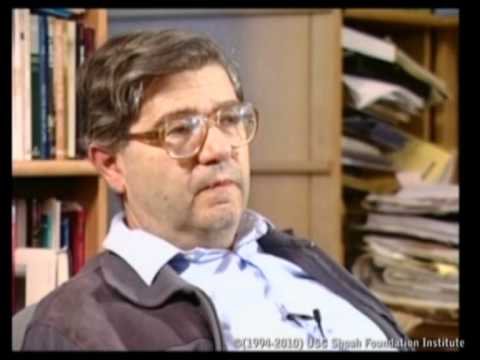 The Rescue of the Future Chief Justice

Though they were simple farmers, the two families of Mozūraitis and Rakevičius saved a number of Jews from the Kovno ghetto. Among the rescued persons was a young eight-year-old child, Aharon Barak (Brik), who after the war immigrated to Israel with his parents, and eventually became Chief Justice of the State of Israel.

The murder of the Kovno (Kaunas) Jews began shortly after the German occupation in the end of June 1941. The ghetto was established in August 1941, and massacres of Jews were carried out periodically throughout the existence of the ghetto. The Ninth Fort, near Kovno, became also the execution site of tens of thousands of Jews from Germany and other countries.

At different periods of time Jaroslavas Rakevičius and his family provided shelter for 20 Jewish families that managed to flee from the Kaunas ghetto. Among them were the families of Meltz, Tulishevitz, Brik, Goldstein, Libman and Shapir. Some had been smuggled out of the ghetto by Jaroslavas Rakevičiuses and his sons, who accompanied the Jews through the forests to their home in the village of Keidžiai, near the town of Raseiniai, about 60 miles from Kaunas. When staying at their home became too dangerous for the refugees, the Rakevičiuses enlisted some of their neighbors and asked them to provide shelter. This extensive rescue operation involved enormous danger, and their home was turned into a kind of fortress, with three shelters, escape routes and observation points on the roof. Proving enormous resourcefulness and with the aid of their neighbors, the Rakevičius family managed to keep the existence of the Jews secret until the Red Army arrived to liberate the area.

Lea Brik and her eight-year-old son Aharon were among the people sheltered by Rakevičius. Having survived the different executions, including the children’s Aktion of March 1944, when 2,000 children and elderly were forcibly taken from their homes and killed while their parents were at work, they had run away from the Kaunas ghetto in May 1944, and found shelter with the Rakevičiuses. However following a search of his house in August 1944 when a Jewish prayer book was found on the premises, Rakevičius decided to find alternative accommodation for his wards. He approached his friends, Jonas and Ona Mozūraitis, a family of poor farmers, who lived in the village of Lenkčiai, Jurbarkas County, with their four children, Mefodija, Alfonsas, Zuzana and Zenonas. The Mozūraitises took pity on Lea Brik and her son and agreed to take them into their home. They prepared two underground bunkers, one inside the house and another in the yard. The hideouts were used when strangers were visiting the Mozūraitises or when searches were carried out in the village. Brik and her son stayed with the Mozūraitis family for two months until the Red Army liberated the village. After liberation, Brik and her son returned to Kaunas where they were reunited with husband and father, Zvi Brik. In 1947 the family immigrated to Israel, where they changed their family name to Barak. Aharon Barak became a professor of law, served as Israel’s Attorney General (1975-1978), was appointed Justice of the Supreme Court in 1978, and was Israeli Chief Justice from 1995 until his retirement in 2006.

At a conference in Yad Vashem in April 2002 about the legacy of Holocaust survivors, Aharon Barak spoke about the impact of the Holocaust on his life:

"What lessons can be learned from these events? Schematically, I think that there are two types of lessons. One type is linked to the people of Israel and the State of Israel, to the centrality of this state in Jewish life, Zionism and the realization of the Zionist vision, to our power of endurance, to the impotence that characterized us, to the necessity that these things not happen again, to our inability to rely on other people and to our own need to defend ourselves, to the centrality of the State of Israel in our lives, and so on. I will never forget our flight from Lithuania to Poland, from Poland to Romania, from Romania to Hungary, from Hungary to Russian-controlled Austria, and from Russian-controlled Austria to British-controlled Austria, sneaking over the border. When we arrived, we crossed the border and were suddenly met by a division of Brigade soldiers bearing the symbol of our flag. Those are things that will never be forgotten. The view of Haifa from the ship when we first arrived is something I will always remember."

On July 15, 1976, Yad Vashem recognized Jaroslavas Rakevičius as Righteous Among the Nations.