The remnants of the Iwje Community, 1945. Esther with white hat in the center

The meeting between Janina and Esther in Iwje 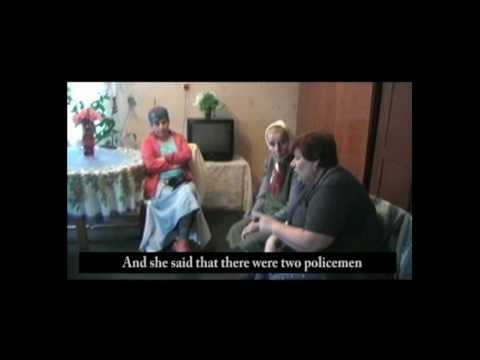 Reunion of survivor with Righteous Among the Nations: Esther Ramiel's journey to Belarus

In Search of Esther

In 1994 a group of former Jewish residents of Iwje, in the district of Nowogrodek, formerly in Poland, today Belarus, applied to Yad Vashem with the request to honor a rescuer family. A couple of years earlier they had erected a monument on the site of the mass graves of the Iwje Jews, and every year on the anniversary of the community's liquidation, they were travelling back to Iwje to commemorate their murdered families and friends. They told Yad Vashem that an elderly local woman, Janina Pozniak, had been coming to their annual memorial services and was asking if anyone knew Esther, the little Jewish girl her family had sheltered during the German occupation. The Association of the Jews of Iwje asked their members if anyone knew a survivor from their community by that name who was a little girl during the Holocaust. There were very little possibilities; only few of the community that had numbered around 2,000 before the war, survived the Holocaust. Finally someone remembered that there was indeed an Esther who had immigrated to the USA. Following the request from the Iwje Association, Yad Vashem wrote to the woman, but she was too young and could not remember how she survived. In the absence of any testimony or documentation about the Rescue of a girl named Esther by Janina’s family, the file was closed.

Thirteen years later a new application reached Yad Vashem. Esther Ramiel, originally from Traby, and now living in a kibbutz in the north of Israel wrote to Yad Vashem with information about her rescue. After many years she had been finally able, so she wrote, to find her rescuers – the Pozniak Family from Iwje. It now also became clear why the Iwje association never found Esther. They were searching for someone from their community, not from Traby, another town in the same district.

Esther Ramiel née Lewin's date of birth is not known, since no one of her near family had survived. It is presumed that she was probably born in 1938 or 1939. Her father had died in 1940, and when the Germans began murdering the Jews in Traby, her mother managed to smuggle her from the ghetto to her brother-in-law in Iwje, which seemed at that moment to be less dangerous. The brother-in-law gave his niece into the care of a friend, Stanislaw Pozniak, who lived in a small village near Iwje. The family were Polish Catholics and had nine children. The oldest child was Janina, born in 1927 and the youngest was a baby, born in 1942. Esther remained with Pozniak until liberation in July 1944. She looked different from the rest of the family – obviously not their child. This greatly endangered the family, and indeed the neighbors informed the Germans who conducted several searches, but never found the child. Janina had been put in charge of Esther and accompanied her everywhere. If strangers approached the house, Janina would take Esther to a nearby wood, or hide her in a shed.

After liberation, the few remnants of what had once been the Jewish community of Iwhe returned to town to look for survivors. When Pozniak learned of their return, he brought Esther to them. An old and torn photo shows the survivors gathering around the mass grave with Esther in the middle. One family, the Shmuklers, who had known Esther and her family before the war, took the little girl with them on their journey westwards. Once they reached Germany they stayed with many other refugees in a DP Camp, where they were waiting for emigration to the USA. For some reason they did not take Esther with them when their time to emigrate came. Instead, she was put with a group of Jewish youth, and in 1946 left with them for the Land of Israel. Having no family, she spent her early years in boarding schools, then studied to be a teacher, married and joined a kibbutz. Esther immersed herself in the challenges of building a new life and a family, and like many survivors, tried not to look back, but to concentrate on the present and future. She had dim memories of the family who had hidden her during the Holocaust and of the girl who looked after her. The name she mistakenly remembered was Kuliak, not Pozniak.

After having taught school for many years, Esther specialized in teaching Hebrew to new immigrants, among them youngsters from the Former Soviet Union. Within this professional work she was once sent to Ukraine to participate in educational programs preparing people for their immigration to Israel. While she was there, she decided to cross the border into Belarus and try to visit the sites of her childhood. But all she found were mass graves. She never crossed Janina's path.

It was an accidental meeting with a woman of the Iwje organization that made the connection. Hearing Esther's story she took the photo that had been taken in 1945 at the mass grave when the group went again to Iwje for their annual visit. As usual, Janina showed up. When she was shown the photo, she immediately pointed at Esther. The following July Esther Ramiel travelled to Iwje with her family. Although over 60 years had passed, Janina immediately identified Esther among the group that disembarked from the bus.

With no common language, the two women had to use an interpreter. But notwithstanding the language barrier, the bond was immediate. Esther had vague memories of the Pozniak home and her life there, which Janina, who was older, was now able to complement. Thus Esther was able to reconstruct the missing years of her childhood.

On her return, she submitted the request to honor her rescuers. The old file from 1994 was reopened and on February 12, 2008, Yad Vashem recognized Stanislaw and Tasilia Pozniak and their daughter Janina as Righteous Among the Nations.