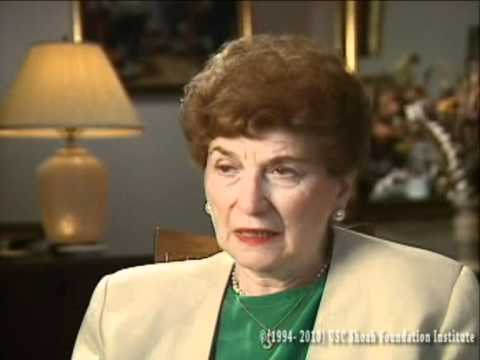 This is the extraordinary story of how British prisoners of war saved the life of one 16-year-old girl. Sarah Matuson (later Hannah Sarah Rigler) was among the inmates of Stutthof concentration camp who in January 1945 were taken on a death march headed towards the Baltic coast. The group of 1,200 women, including her sister, Hannah, and her mother, Gita, was staggering in the snow, dressed in rags, with only wooden clogs on their feet, with no food and under the heavy blows of the SS guards. Hundreds of women perished on the way and only about 300 reached the village of Gross Golmkau (Golebiewo in Polish) 30 kilometers south of Gdansk.

Sarah's family was from Lithuania. Before she was born, her parents had gone to Palestine, where her sister Hanna was born in 1925. But their immigration to Palestine did not work out for them and the family moved back to Lithuania. Not knowing what the future had in store for them and for Europe’s Jews, they settled in Shavli (Siauliai), where their second daughter, Sarah was born in 1928.

Sarah's father was arrested with a group of other Jews soon after the German occupation in the end of June 1941. He was never seen again. The mother and two daughters were forced into the Shavli ghetto. Despite the difficult conditions and the continued killing operations, they managed to survive until summer 1944, when they were taken with the remaining Jews of Shavli to the Stutthof concentration camp. As the Soviet army approached, they were taken on the death march.

Seeing the hopelessness of their situation, Sarah’s mother pleaded with her daughter to try and escape. It was a painful decision to leave her mother, but finally Sarah decided to try and find some food for them. She succeeded to leave the line of prisoners unnoticed and found refuge in a barn where she collapsed.
It was here that she was found by a group of British prisoners of war. Stan Wells was working on Mrs. Miller’s barn. He belonged to a group of British prisoners of war who had been captured in 1940 in France, and who were transferred to the east, interned in a camp close to the Baltic coast, where they were engaged in various tasks in the German farms of the area. Finding Sarah who was starved and totally exhausted, Wells first gave her some food and then brought her to the other prisoners wrapped in an old army coat. Shocked by her poor physical condition, they decided to help her. They smuggled Sarah into their prisoner of war camp – Stalag 20B in Gross-Golmkau, where they hid her in a hayloft. In view fragile state, they took turns in caring for her. They brought food, tended her frostbite, applied paraffin to her hair against lice, bathed her and nursed her back to health. The danger of discovery was great: just outside their living quarters was a police station. The horses used by the police were housed in the very same barn, and Sarah was hidden in the hayloft above the horses.

However soon the British POWs were also to be moved. On the eve of their evacuation into Germany, Sarah’s British benefactors arranged for a local woman to take care of Sarah until the arrival of the Red Army.

After liberation Sarah found out that she was the only survivor of her family. She eventually settled in the United States. In memory of her sister she added the name Hannah to her own. For many years she tried to find her rescuers, but only 25 years after the end of the war was she able to locate them and renew the contact.

Sarah Hanna Rigler, the sole survivor of her family, commemorated the names of her father, mother, sister, 2 uncles, 4 aunts and 6 cousins who were killed in the Holocaust on Pages of Testimony at Yad Vashem.