Jakob Zim lit one of six torches at the State Opening Ceremony of Holocaust Remembrance Day at Yad Vashem in 2010. 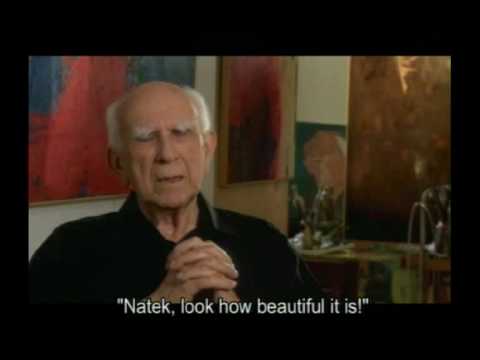 Jakob Zim (Cymberknopf) was born in 1920 in Sosnowiec, Poland, to Herman (Zvi) and Gabriela. With the German occupation, young people were rounded up for forced labor, but thanks to his artistic talent, Jakob was sent to work as a draftsman in the city’s police station. In mid-1941, he was forced to leave, but a well-connected German who had heard about Jakob’s skill asked him to set up an applied arts workshop. There, Jakob found temporary refuge, together with his two brothers and 120 youths, most of them friends from the Zionist Youth Movement. In the spring of 1943, the remaining Jews in the city were moved into the ghetto, including four of Jakob's family: Jakob, his father, mother and eldest brother. His younger brother, Nathan, had been sent to a forced labor camp, and their other relatives were deported to Auschwitz.

The liquidation of the ghetto began on 1 August 1943, nine days before Tisha B'Av. Jakob was sent to the Annaberg forced labor camp in Silesia, where he reproduced from memory a painting by the artist Josef Budko called No One Cries Like Me, adapting it to his own situation. He was sentenced to 25 lashes and deported to the Blechhammer camp, which soon became an extension of Auschwitz. Several weeks later Nathan arrived, which Jakob viewed as the hand of destiny.

As the Red Army approached, the prisoners were taken on a death march. Jakob and Nathan trudged over snow-covered fields, one brother supporting the other. Suddenly, in the distance, they saw roofs and a church tower glowing gold in the winter sun. Taking such pleasure in the beauty of creation, Jakob realized that the artist within him was the source of his strength, and that he had to survive in order to tell his story in his own language – paint. The brothers made it to Buchenwald, where they were liberated.

After emigrating to Israel, Jakob continued his studies at the Bezalel Academy of Art and Design in Jerusalem, where he met his future wife Ruth. He earned a name for himself as a graphic designer and artist, exhibited his work in Israel and abroad, and won many prizes, including an international competition to design a stamp to commemorate the Holocaust.

Jakob memoirs, Shards and Light, describe his artistic creations, which express the events he experienced and his optimistic approach to life. Jakob summarizes by saying, “I’ve learned to live with the shadow and to create with the light.”