Esther Zamri lit one of six torches at the State Opening Ceremony of Holocaust Remembrance Day in 2002. 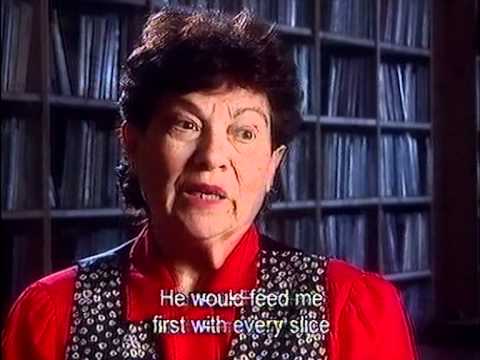 Esther Zamri née Hazan was born (most probably) in 1936 to an affluent family in Ciechanowiec, Poland — the youngest daughter of five children.

In 1939/40 her father was taken from their house, either by communists or rioters, and never returned. In 1941 a ghetto was established in the city. Esther’s two older brothers fled the ghetto, but were shot and killed. Her mother escaped with the three youngest children to the home of the Bialy family — a family of farmers who agreed to hide them.

Initially Esther and her family lived in the barn, lying silently in the hay during the day and stretching and eating their meager food rations (provided by the father, Kazimierz) at night. After a few months, when rumors circulated that the Germans were beginning to search for Jews in the village, Kazimierz hid the family members in various places including in a pig stall and in the woods.

With the worsening of the situation, Kazimierz took the family to the fields, put them in sacks, and covered them with cow manure. They remained there for two months with minimal food. Starving and desperate, Esther’s mother took her eldest son, Itche, to beg for food, an act that cost them their lives. Esther heard her mother scream: “Don’t kill me — I have young children…” and the sound of two gunshots. That night, Esther’s other brother, Arieh ventured outside and found the two bodies.

Esther tempered her reaction to their deaths following her mother’s orders to survive: “Do not talk. Lie silently during the day and hide.” They were always to stick together and share the little they had.

For the next few months Esther and Arieh remained in the field, hidden under sheaves of wheat, with Kazimierz’s help. Following the Russian liberation of the area, Kazimierz took the two children home to Ciechanowiec, where they were reunited with their uncle and his family, who had also been hidden by farmers. The devoted Bialy family had hidden Esther and Arieh for three years.

After the war, intent on living in a “Jewish state,” Esther and her brother joined a Hashomer Hatzair group, and arrived in Palestine in 1945. Arieh settled on Kibbutz Gan Shmuel and Esther on Kibbutz Merchavia, where she still lives today.

About ten years ago, Esther and Arieh went to their hometown to visit their rescuers. In 1991, Kazimierz and Janina Bialy were recognized by Yad Vashem as Righteous Among the Nations. Esther has four children and nine grandchildren.