Yehuda Widawski lit one of six torches at the State Opening Ceremony of Holocaust Remembrance Day at Yad Vashem in 2012. 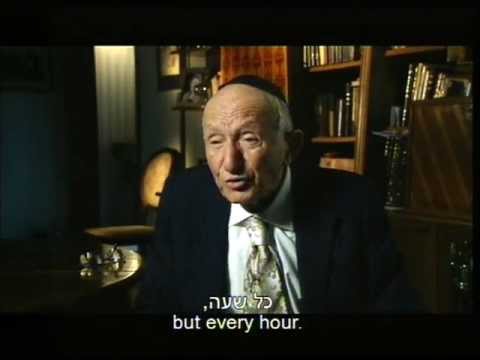 Yehuda Widawski was born in 1919 in Turek, Poland, the second of four children in a traditional Zionist family. In 1933, the family moved to Lodz, and Yehuda became an active member of the Hashmonaim youth organization. By 1936, Yehuda was managing a textile business, employing 38 Jewish seamstresses who sewed shirts and underwear for the army; their products were marketed throughout Poland.

In September 1939, Lodz was occupied by the Germans. Yehuda's family managed to buy an apartment in the district to be transformed into the Lodz ghetto. The apartment was shared by 15 family members, and Yehuda was able to smuggle into it a large amount of property from his former home and factory.

In April 1940, Jews were prohibited from leaving the ghetto. The Widawskis continued to work in textiles, both from home and at a factory. One of the first soup kitchens in the ghetto was established at their home; thanks to the property they had the foresight to take with them, the Widawskis were able to help their friends and acquaintances.

In August 1944, the ghetto was liquidated and the Widawskis were deported to Auschwitz. Yehuda's parents, Abraham and Leah, and his eldest brother, Gabriel, were murdered immediately. Eight days later, Yehuda and his younger brother, Jehoszua, were transferred to the Friedland work camp, where they made airplane wings. Yehuda's cousin was sent to the same camp; from time to time, Yehuda managed to give him some bread. Before he died, he gave Yehuda his shoes.

On 8 May 1945, the Germans abandoned the camp, locking in the inmates. The following day, the camp was liberated by the Red Army. Yehuda and Jehoszua returned to Lodz, only to find their apartment inhabited by Poles. Hearing that their sister had died during the liquidation of Stutthof, Yehuda and his brother realized that, together with their uncle, they were the only members of their family to survive. Yehuda set up a new textile factory and married Lea Dobrysz, z"l. The couple had a son, and Yehuda assisted the Irgun in smuggling weapons to Israel.

In 1950, Yehuda immigrated to Israel, where he founded and ran various commercial enterprises.

In 1978, Yehuda traveled to Lodz and, together with a friend, set about restoring the Jewish cemetery. So far, 7,000 graves have been renovated.