Sara Weinstein lit one of six torches at the State Opening Ceremony of Holocaust Remembrance Day at Yad Vashem ⁣in 2015. 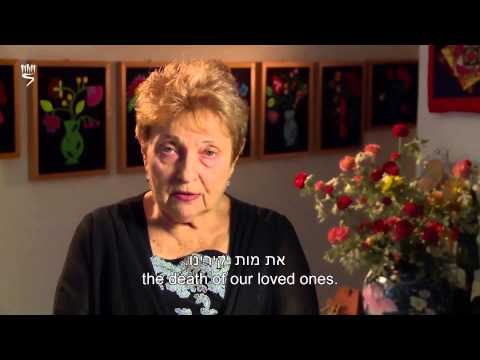 Sara Weinstein née Chait was born to Benjamin and Miriam in 1935 in the town of Stepań, Poland (today Ukraine). She had five brothers and sisters.

In September 1939, the Soviet Union occupied Stepań and Sara’s two older brothers were conscripted into the Red Army. In July 1941, the Germans occupied the town and the family fled to the countryside, but they were caught and forced into the ghetto. There, Sara sometimes joined the streetcleaners and received a little food in exchange.

On the eve of the ghetto’s liquidation in August 1942, a friend named Popil smuggled the family into his house outside the ghetto. A few weeks later, Ukrainian villagers broke into Popil’s home and shot the people they found there. Popil, the unknown Righteous Among the Nations, was murdered along with his wife and Sara’s mother, who had protected Sara with her body. Sara was wounded in the shoulder and back.

After the slaughter, the murderers set fire to the house and left. When they had gone, Sara's father shouted, "Whoever’s alive, get up and let’s get out of here!" Sara, her father, her brother and her two sisters buried their mother in the nearby forest, where they and others found refuge. They dug pits with their hands for water and shelter, covering themselves with leaves and branches.

At night, the men would go to the nearby villages to steal food, clothing and oil for removing head lice. If discovered, the families would be forced to flee deeper into the forest, further from sources of food. The children learned to play games without making a sound. For the entire time they lived in the forest, Sara wore the same dress. "For many years afterwards, I just never felt the cold," she recalls.

In the summer of 1944, after the Red Army liberated the region, Sara’s father was murdered by local Ukrainian villagers. Sara and her two sisters were transferred to Lena Küchler’s orphanage, where they were well-treated. Sara then traveled to Milan, Italy, and lived for a while in the children’s home in Selvino. She immigrated to Eretz Israel in 1947, settling in Kibbutz Givat Haim, where she studied and worked. A year later, she joined a group of peers at Kibbutz Givat Hashlosha. At the age of 16 she joined the IDF, and after being discharged she married Avraham.

Sara tells her life story at schools, to IDF units and to youth groups. She is active in Amcha, a support organization for Holocaust survivors, which she calls her "second home."