Chasia Vardi lit one of six torches at the State Opening Ceremony of Holocaust Remembrance Day at Yad Vashem in 2012. 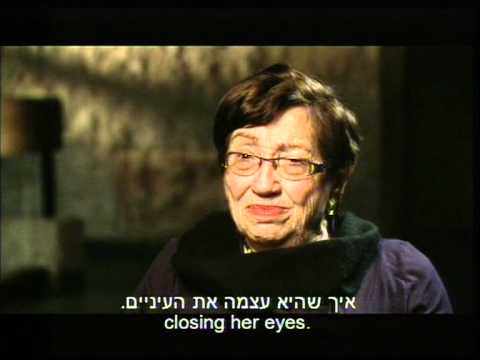 Chasia Vardi was born in 1932 in Stoczek Wegrowski, Poland, the only daughter of Yaakov and Rivka. When war broke out, Chasia, her parents and a dozen other relatives moved in with her grandmother, Chaya. Banned from attending school, the Jewish children continued to learn in small groups with teachers who had fled Warsaw.

In April 1942, Yaakov left for work, and was apparently killed a short time later at Treblinka. In September 1942, all of the town's Jews were rounded up to be deported. Chasia hid in a bunker, and later fled with a group of women and children, including her mother and grandmother. During the day, Chasia begged for food in nearby villages, and at night she slept in the forest. Chaya taught Chasia to knit, and she exchanged her products for food. From time to time, Chaya also went into the villages to collect food from old acquaintances.

In November 1942, the Germans captured 11 people from Chasia's group, including Chasia, her mother, and her cousins, Moshe and Srulik. They were taken to a ditch along the road just outside Mrozowa Wola, ordered to sit down, and shot. Miraculously, Chasia survived. Chaya, who had been out collecting food when Chasia was captured, found her and took her to the nearby Kosów ghetto. There Chaya died in Chasia's arms.

When the ghetto was liquidated, Chasia hid in an attic. She then fled to the home of the Radzyminski family in Stoczek. Leokadia Radzyminski helped Chasia, but her husband chased her away. She joined a group of Jews hiding in a bunker in the forest. Leokadia Radzyminski's son Mieczyslaw (Mietek) brought them food and information until the Red Army arrived. In 1990, Yad Vashem Mietek and Leokadia Radzyminski were honored as Righteous Among the Nations.

After liberation, Chasia returned to Stoczek, but met such rampant antisemitism that she moved to Lodz. After staying with a foster family, she was transferred to an orphanage, where an active Zionist movement helped her cross the border into Czechoslovakia and then to Germany. In April 1946, Chasia immigrated to Eretz Israel legally.

Chasia joined Kibbutz Gan Shemuel as part of a youth group, which was trained under the auspices of the Palmach. She then took part in the establishment of Kibbutz Nir Yitzchak. Following the War of Independence, she moved to Afula, where she worked at Bank Hapoalim.

Chasia travels to Poland with youth delegations and meets with students at Israeli schools. With the assistance of Zbyszek (Zbigniew) Nizinsky, a Polish activist who commemorates the Holocaust by erecting monuments throughout Poland, Chasia has been working to establish a memorial for the Jews who were murdered in the ditch outside Mrozowa Wola, and another upon their grave in the nearby forest.