Robert Tomashof lit one of six torches at the State Opening Ceremony of Holocaust Remembrance Day at Yad Vashem ⁣in 2016. 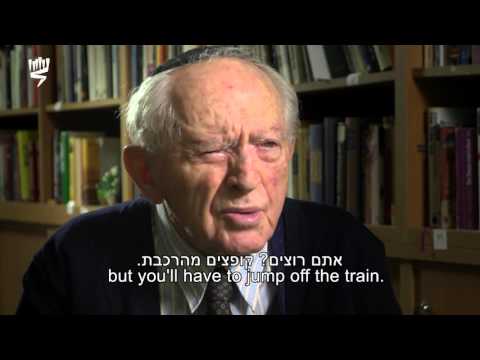 Robert Tomashof was born in 1916 in Dolný Kubín, Czechoslovakia, to a religious family of eight. In 1933, one of Robert’s brothers immigrated to Eretz Israel. His father passed away that same year.

In March 1939, when the fascist regime rose to power, Robert was forced into the Slovak army, building labor camps for Jews, constructing airfields and expanding the channel of the Danube to prevent flooding.

In 1942, Robert’s mother and brothers, William and Julius, were deported to Auschwitz and murdered. Robert fled to his sister’s home in Žilina. He acquired false papers under a Christian name, but had to run again when an acquaintance recognized him.

Using a new set of false papers in early 1944, Robert moved to Budapest, where he tried to arrange immigration papers to Eretz Israel. He received new forged ID cards, but he did not stamp them properly and was arrested after the Germans invaded Hungary in April 1944.

Robert was imprisoned in Budapest while awaiting deportation to Auschwitz. At the jail, he volunteered to help fill out multilingual forms. In one of the office’s drawers, he found stamped laissez-passer documents and took one. After the clerks left their workplace, he waited for the shift change, took a stack of forms, and told the building guard that he had to bring them to be inspected outside the jail. The guard told him to wait until he finished locking up; when he disappeared from sight, Robert rushed to the gate, showed the guards the laissez-passer, and fled.

Acquaintances in Budapest organized a new set of forged papers for Robert, as well as work at a local factory. When suspicions regarding his identity were aroused, he fled by train and on foot to the city of Arad, Romania. In August 1944, following a false rumor of ships sailing to Eretz Israel, Robert came to the pre-departure rally point; he was arrested and put on a transport to Hungary. However, the train stopped at the Hungarian border, and the guards left. The train turned back to Arad, and Robert was transferred to a labor camp in the city of Târgu Jiu. The Red Army liberated the city at the end of August 1944.

Back in Bucharest, Robert helped establish an aid center for Czechoslovakian refugees and provided them with papers that granted them freedom of movement. Later he moved to Prague, where he served as secretary of the local Zionist organization, aiding immigrants to Eretz Israel and procuring armaments for the yishuv. In 1946, he married Miriam, an Auschwitz survivor, and they immigrated to Israel in 1948.

Robert and Miriam have a son, a daughter, and two granddaughters.