Hinda Tasman lit one of six torches at the State Opening Ceremony of Holocaust Remembrance Day at Yad Vashem in 2014. 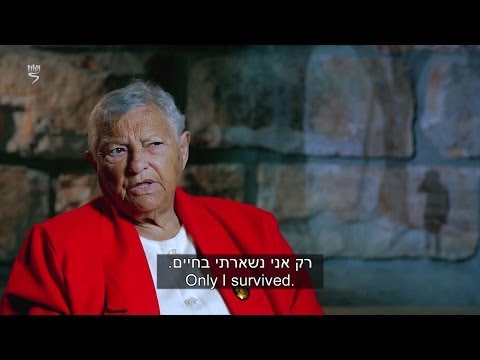 Hinda Tasman (née Nachamchik) was born in Minsk, Belarus in 1929, the middle of seven siblings. Her father Eli owned a bakery and worked as a builder and metalworker. Her mother Taybe (Tova) ran the small family farm, and on market days sold fruit, eggs and milk.

In July 1941, after Germany invaded the Soviet Union, the Jews of Minsk were incarcerated in a ghetto. Almost every night Germans entered the ghetto and murdered entire families. One night in November, German soldiers entered the Nachamchik family home and shot every member of the family. Hinda survived because her father concealed her with his body.

For some time, Hinda hid in the home of her cousins and neighbors, the Rubenchiks. She collected various items from the homes of murdered Jews and smuggled them out of the ghetto for food, bringing back supplies at enormous risk to her life. When the ghetto was struck with a typhus epidemic, Hinda fell ill but somehow survived.

In April 1943, following in the footsteps of her aunt Yocha (Yocheved), Hinda escaped from the ghetto and went into hiding in one of the villages near Minsk. Several weeks later, she was recruited by a partisan unit under the command of Shalom (Simcha) Zorin, which operated in the nearby forests. As Hinda was considered to look non-Jewish, her first mission was to return to the ghetto and, together with her friend Ida Zukerman, smuggle people – including entire families – out to the partisans' camp some 30 kilometers away. Hinda would infiltrate the ghetto, either slipping through the barbed wire or concealing herself among workers returning from the various factories beyond the fence. Each time she brought out dozens of Jews, among them doctors, who brought medications and medical equipment into the partisans' camp, as well as younger people who became fighters. In addition, Hinda smuggled out medicines, bandages, food and valuables to be exchanged for food in the nearby villages. She also collected "loose" weapons and ammunition at German army encampment sites, as well as Soviet weapons left behind during the Red Army's rapid retreat in the summer of 1941.

After the war, Hinda returned to Minsk and enrolled at a night school while working at a local sewing factory. In May 1947, during Victory Day festivities, she met Boris Tasman – a war veteran and machine technician – and married him two months later.  The couple moved to Poland, and then immigrated to Israel in 1959.