Dov Shimoni lit one of six torches at the State Opening Ceremony of Holocaust Remembrance Day at Yad Vashem ⁣in 2015. 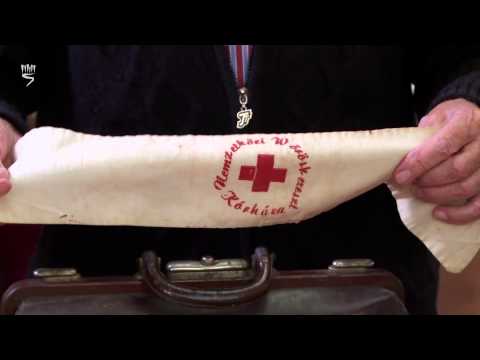 Dov Shimoni (né Erwin Schwarz) was born in Budapest, Hungary in 1919. His parents, Moshe and Gizela (née Beinhacker), belonged to the Neolog stream of Judaism. Dov had an older sister, Margalit.

During WWII, Dov was injured at a labor camp and hospitalized at a Hungarian military hospital. While on sick leave, he worked as a clerk in the Jewish hospital in Budapest.

In the summer of 1944, a few months after Germany occupied Hungary, thousands of Jews in Budapest, including Dov’s family, were imprisoned in a number of buildings throughout the capital city. Dov managed to transfer his family to a house whose Jewish tenants had been taken away, and upon which a sign hung declaring it "Jew-free." Thus his immediate family members survived.

In March 1944, when the SS expropriated the Jewish hospital and ordered the patients removed, Dov and his friends converted the local Jewish school to an alternative hospital. Dov was ordered to provide the SS with a list of the hospital’s inventory. Knowing that that from that moment on he would not be permitted to take anything out of the hospital, he purposely left the smaller pieces of equipment off the list, thus enabling the hospital workers to smuggle out anything portable. This equipment was ultimately moved to a new hospital established in the Budapest ghetto at the end of 1944.

The building allocated for the hospital in the ghetto’s territory was too small to include all the sick people, so Dov helped locate and set up 18 additional buildings to serve as hospitals: four in the ghetto and 14 outside it. Contacting other hospitals and members of the labor battalion in which he had worked, he managed to recruit 22 maintenance workers and orderlies. As hospital workers, they received permits to enter the ghetto and thus managed to bring food and medicine inside, as well as to take patients outside.

After the region was liberated by the Red Army, Dov set about restoring the Jewish hospital. He helped establish Zionist movements in the city and participated in the Zionist Congress in Basel, in addition to managing the American Joint Distribution Committee’s health institutions in Hungary.

In January 1949, Dov immigrated to Israel with his family. He worked at a military hospital (now Tel Hashomer) and then in managerial capacities at hospitals and health care organizations. After retiring, he volunteered inter alia at the archives of the Hagana Museum and the Israel Cancer Association.

Dov and his wife Elisheva, z"l, had two daughters. Dov is now married to Ilona; they have nine grandchildren and four great-grandchildren.