Jeannine Sebbane-Bouhanna lit one of six torches at the State Opening Ceremony of Holocaust Remembrance Day at Yad Vashem in 2017. 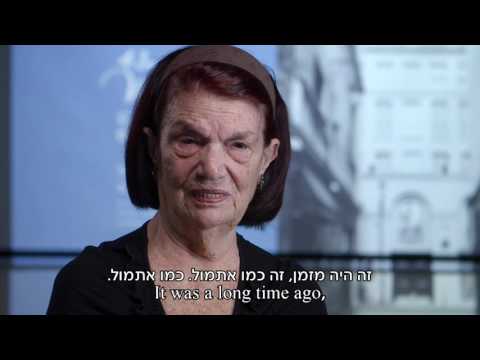 Jeannine Sebbane-Bouhanna was born in 1929 in Nemours (now Ghazaouet), Algeria, to Jacob and Rahma. She was the fourth of six children. Jacob, who had fought in the French Army in WWI, was a carpenter by profession.

In 1938, the family immigrated to Paris and settled at 43 rue Vieille du Temple in Le Marais (fourth district). They lived among relatives, and maintained a traditional Jewish lifestyle. Jeannine and her family were full French citizens and spoke the language accent-free, in stark contrast to their Eastern European immigrant neighbors.

In May 1940, the Germans occupied France, and Jeannine’s father and older brother passed away a year later. Her mother smuggled her older sister and brother, Odette and Maurice, into the free zone of southern France, while Jeannine stayed in Paris and helped provide for the family. She took trains around the city while wearing the yellow star, standing in long lines at the bakeries and grocery stores while Rahma watched her three younger siblings at home.

On 16 July 1942 (the date of La Rafle du Vel d'Hiv, the roundup of the Jews of Paris), French gendarmes raided the arrondissement. Jeannine and her family avoided arrest that day because they had French citizenship, but their close friends and neighbors were taken away. They went to the police station with food for their neighbors, and witnessed their detention and deportation to concentration camps.

Two of the neighbors’ daughters hid in Jeannine’s home. Jeannine and Rahma brought the two girls food and drink every night for over a week, despite the risk that the building’s concierge would find out and turn them in. Rahma then helped smuggle them to the unoccupied zone in southern France, and they survived.

Jeannine's family received letters from their neighbors who had been detained in concentration camps in France before being deported to their deaths. They tried to aid the detainees with food packages, and for decades they kept the deportees’ letters, which documented the detention camps and the deportations to the east – rare Holocaust-era testimony.

When Jeannine’s brother Maurice returned to Paris to help the family, he was captured, deported to Sobibor and murdered. Jeannine and her three younger siblings were hidden by farmers in a village outside Paris, and in 1944 they fled to southern France, where they survived in a small village with the help of her older sister Odette’s husband.

After the war, Jeannine married Lucien Bouhanna in Algeria. They returned to France, and followed their children to Israel in 1992.