Lonia Rozenhoch lit one of six torches at the State Opening Ceremony of Holocaust Remembrance Day at Yad Vashem ⁣in 2016. 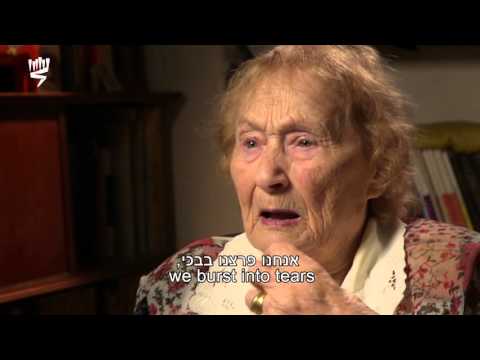 Lonia Rozenhoch (née Wudka) was born in 1920 in Radom, Poland, to a family of five. Her father was a shoemaker and a member of the Bund, a socialist Jewish party. At the age of just 17, Lonia began to study at the University of Warsaw. When Germany invaded Poland in September 1939, she returned to her parents’ home. In April 1941, all the Jews of Radom were interned in the city's ghetto.

One of Lonia’s friends proposed that she join him and flee to Soviet-occupied territory, but Lonia refused to leave her family. "That was a formative moment in my life," recalled Lonia. "That was when I decided that staying together was my motto."

Lonia married her sweetheart, Moniek Rakocz, but the couple was forced to part ways when she was sent to a labor camp in a weapons factory, together with her two sisters, Bella and Malka. There, too, she declined an offer by a Ukrainian laborer to escape the camp and live in a village under a false Christian identity.

In two Aktionen in August 1942, the Jews in the Radom ghetto were deported to Treblinka. Lonia’s mother, her husband Moniek and his family were all murdered there. Her father was probably murdered en route to the deportation trains. In July 1944, with the advance of the Red Army, Lonia and her sisters were sent on a death march across Poland. On 3 August, they were deported to Auschwitz.

At Auschwitz, the sisters managed to stay together, both where they slept and where they worked. At roll call, Lonia concealed her sister Bella’s bad back, so that she would not be selected for murder.

In December 1944, Lonia and her sisters were transferred to Ravensbrück and its sub-camp, Malchow. They were forced to work in a munitions plant. Lonia's leg had been injured by SS beatings at Auschwitz, but her sisters helped her until she was reassigned to work in the kitchen.

In April 1945, the sisters were released in a prisoner exchange deal. They went to Sweden, where Lonia began working as a teacher of child Holocaust survivors on behalf of Youth Aliyah. In March 1948, Lonia boarded a ship bound for Haifa. She moved to Kibbutz Afikim, where she married Jacob and worked as a teacher of young immigrants.