Lea Reuveni lit one of six torches at the State Opening Ceremony of Holocaust Remembrance Day at Yad Vashem in 2020. 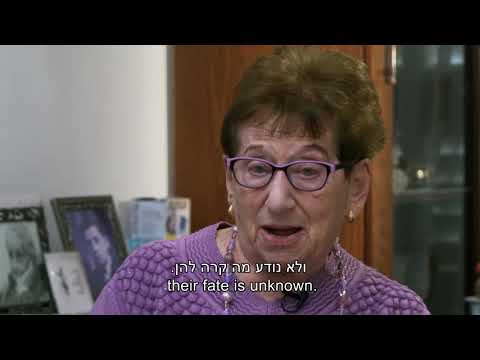 Lea Reuveni was born in Iršava, Czechoslovakia in 1926, the eldest daughter of Elias and Halana, who raised a traditional family of nine. In 1929, her family moved to Antwerp, Belgium.

When the city came under aerial attack in May 1940, the family fled the city and Lea lost contact with her mother and two of her siblings. For eight months, Lea took care of her younger siblings and the household.

When she heard that her mother and missing siblings were in southern France, Lea went to the German command center and asked for a travel permit. The Germans authorized Lea and her siblings to travel to Paris, but forbade the father from leaving. Lacking any alternative, they bade their father goodbye and traveled alone by train, all the while fleeing from German soldiers and evading checkpoints.

German troops boarded the train at the station in Lyon. When they saw the restricted permit, they threatened to throw them off the train. Thanks to her courageous arguments, the Germans allowed them to continue on, and they found her mother in the southern city of Quarante. Their father joined them a few weeks later.

When Vichy police began taking away Jewish refugees in the city in the summer of 1942, Lea went to look for a new place for her family to live. She wandered on foot and by train, spending nights in train station waiting rooms until she came to the town of Chirac. There she met the mayor, who was willing to give them an abandoned house with no bathroom. Her youngest brother was born in Chirac.

In November 1942, Germany occupied southern France except for the area occupied by the Italians, and Lea’s father was arrested. Lea went to the local command center and asked for him to be released for a day, explaining that her mother was recovering from childbirth. Impressed with her boldness, the French commander approved the request. Lea and her father fled to Nice, which was under Italian occupation. Afterwards, Lea managed to smuggle her mother and siblings into the city, too.

In 1943, the Germans occupied the area of Nice, and Lea and her family fled again, this time with a group of refugees. Lea backtracked several times along the tortuous mountainous paths in order to help the elderly and women with children. Lea and her family reached the town of Borgo San Dalmazzo, where she contacted Father Don Raimondo Viale. The priest, who was later recognized as Righteous Among the Nations, smuggled Lea’s family into the forest, where they reached a monastery in the area of Florence.

In November 1943, the Germans raided the monastery. Lea remembered that the Hungarians were allies of the Germans, and convinced them that she and her mother were Hungarian gentiles who had lost their papers. Lea managed to save 15 other Jewish women in a similar manner.

After Lea’s father was apprehended, Lea urged her mother to flee to Rome with the children. She stayed behind in the monastery in order to maintain contact with her father Elias, but he was deported to the camps and murdered.

After liberation, Lea reunited with her family in Rome. In 1960, she immigrated to Israel and worked as a hospital nurse. Lea volunteers in a retirement home and visits lonely Holocaust survivors. She has no children of her own. For her 80th birthday, all her extended family came to celebrate with her. One of them said:

“If it weren’t for your actions, none of these children would be here today. They are your children.”