Ephraim Reichenberg lit one of six torches at the State Opening Ceremony of Holocaust Remembrance Day at Yad Vashem ⁣in 2015. 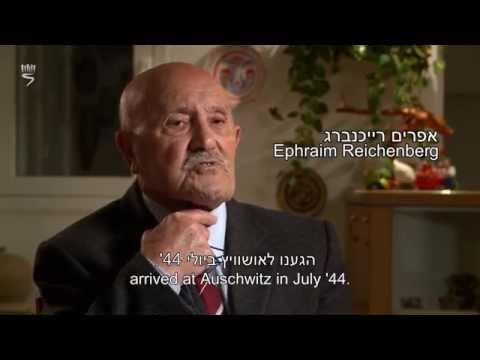 Ephraim (Moshe) Reichenberg was born in 1927 in the town of Pápa, Hungary to Avraham and Mahala. He and his brother Menashe were the oldest of seven brothers and sisters. When they were children, the family moved to Budapest.

In March 1944, the Germans occupied Hungary, and in July, Ephraim’s family was deported to Auschwitz in a cattle car. During the journey, many people died from hunger, overcrowding and suffocation. When the transport reached Auschwitz, Ephraim and Menashe were told to say that they were twins, so that they would be taken for experimentation and not to the gas chambers. They were led with other twins to a shack in the gypsies’ camp, whose occupants told them that their parents had been murdered. Menashe tried to commit suicide on the electric fence, but Ephraim pleaded with him to survive.

The boys were taken to Mengele’s laboratories for medical experiments on their vocal chords. They supported each other throughout this terrible ordeal; Menashe diligently hid bread and shared it with his brother, and even gave Ephraim a red vest he managed to acquire as a birthday present.

On January 18, 1945, Ephraim and Menashe were taken on the death march from Auschwitz. When they reached Gliwice, they were put on a roofless freight train in heavy snow, and with no food. Weaker prisoners were crushed to death. Every so often, the guards shot prisoners. When the train reached Sachsenhausen, out of the car’s 160 passengers, only 22 were still alive, including Ephraim and Menashe. Ephraim was taken to work in a munitions factory. On 14 April 1945, they were forced on a death march to northern Germany. They were liberated on 5 May by the Red Army.

Ephraim and Menashe eventually reached Prague, where Menashe was hospitalized. Ephraim returned to Budapest to search for surviving family members, but did not find a single one.

In June 1946, Ephraim learned of his brother's death in Prague. Ephraim, whose name until then had been Moshe, changed his name to Ephraim in memory of his brother Menashe, after the sons of the biblical Joseph, Ephraim and Menashe.

In 1947, Ephraim left Hungary, reaching Eretz Israel in the beginning of 1948. He was absorbed at Kibbutz Givat Haim and served in the Hagana and Palmach. In 1967, he began to suffer from complications in his throat in the wake of Mengele's experiments, eventually losing his voice. In 1984, he regained the ability to speak with the aid of a device manufactured in Germany.

Ephraim worked for the Communications Ministry and Bezeq until his retirement. Today he tells his life story in schools, and organizes meetings of survivors of Mengele’s experiments.