Max Privler lit one of six torches at the State Opening Ceremony of Holocaust Remembrance Day at Yad Vashem in 2017. 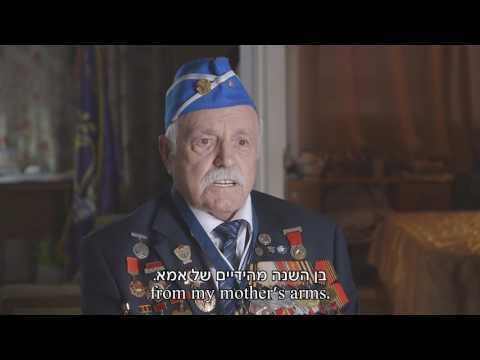 Max Privler was born in 1931 in the village of Mikulichin in Poland (now Ukraine) to David and Malka. He was the second of four children. The family owned land, factories, shops, and even a school and a synagogue.

In June 1941, the Germans occupied the region and the family’s property was confiscated. In March 1942, Gestapo men and Ukrainian police broke into Max’s family’s home and took Max and David to the police station. Malka and her younger children were sent to the Stanislawow ghetto. The next day, Max and David were brought to the forest with a group of Jews. A second before they were shot, David pushed Max into the killing pit, and was shot on top of him. One bullet lodged itself into Max’s shoulder and remained there for over 25 years. Max managed to climb out of the pit at night and fled to the home of the Boyuk-Nimchuk family, Ukrainian friends, who hid him.

One day, Max snuck into the ghetto with some food for his family and saw Malka fighting a Gestapo man, who was pulling her baby from her arms. He witnessed his mother being hanged and his baby brother murdered by the Germans.

On another occasion, Max was caught and sent to work in the family factory. After six months, the child laborers, including Max, were trucked to the forest to be executed. Max managed to flee to the adjacent forest, where he joined a group of partisans.

When Max suffered from frostbite, a passing doctor sent him with a partisan commander who was headed to Moscow for treatment. After he had recuperated, Max enlisted in the Red Army and was sent to a school training children to perform military operations. His mastery of five languages—Polish, Czech, German, Ukrainian and Russian—was an asset.

Max commanded a platoon that conducted intelligence and sabotage, and helped liberate Kraków and Auschwitz. However, he sustained serious injuries in the battles to liberate Prague. He was buried under the rubble of a building that had collapsed, with an iron rod lodged in his head. He was pulled out and hospitalized, but remained unconscious for months until he recovered.

After the war, Max lived in Ukraine. He immigrated to Israel in 1990. He remains active in the Association of Disabled Veterans of the War against Nazism as well as the commemoration of children who served in the Red Army during WWII, and is the author of several books on the subject.