Moshe Porat lit one of six torches at the State Opening Ceremony of Holocaust Remembrance Day at Yad Vashem in 2017. 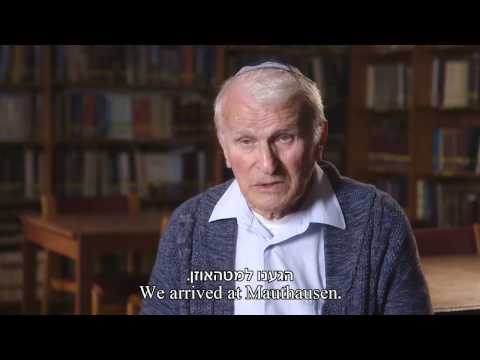 Moshe Porat (né Frisch) was born in 1931 in Hajdúnánás in southeastern Hungary to to Jozsef Levy and Gizella-Naomi – an observant Hasidic family of seven.

In March 1944, the Germans occupied Hungary. Jozsef was taken away for forced labor on the first day of Passover that year. On 19 May 1944, while he was home on leave, he took a pair of scissors and silently cut the sidecurls off all four of his sons. "He wanted to do it himself rather than let the Germans do it,” Moshe recalls. A few days later, Jozsef reported back to the Hungarian Army, never to return.

By the end of May, a ghetto was established in the city. The men were sent to forced labor, and the community was left with only women, children and the elderly. On 17 June, the ghetto’s inhabitants were deported in cattle cars to Debrecen, where they were concentrated in a brick factory.

Moshe observed his Bar Mitzvah on 21 June  1944. “I took my new set of tefillin (phylacteries), which my father had bought me during his last leave, out of my backpack. I concealed them in my shirt and my uncle led me to a hidden nook. Other worshippers were congregating in the nook, and I read from the Torah.”

Days later, the Frisch family was forced onto a train for deportation. The train was bombed by the Allies and stopped on the tracks for many days. Many of the deportees died of suffocation, hunger and thirst, including Moshe’s great-grandmother. When the train finally reached Vienna, they were transferred to a labor camp. Moshe’s older brother, Shevah, was sent to a different camp and murdered.

As the Red Army drew near, the prisoners were sent on a death march. Moshe’s mother and older sister Pnina took turns carrying Dani, his frail eight-year-old brother, on their shoulders. After three weeks, the survivors reached Mauthausen, where Moshe and his brothers Asher and Dani were separated from Gizelle and Pnina and sent to forced labor. On 5 May 1945, they were liberated by the US Army. Gizelle died two weeks later.

After first returning home, Moshe made his way to Austria and Italy, and in the summer of 1948, he reached Israel. He helped found a garin (core group of settlers) in Kibbutz Shluhot and wrote his autobiography. Today he lectures and gives testimony about his experiences during the Holocaust and accompanies youth delegations to Poland.

Moshe and Tova-Gita z"l have four daughters, 15 grandchildren and 11 great-grandchildren.