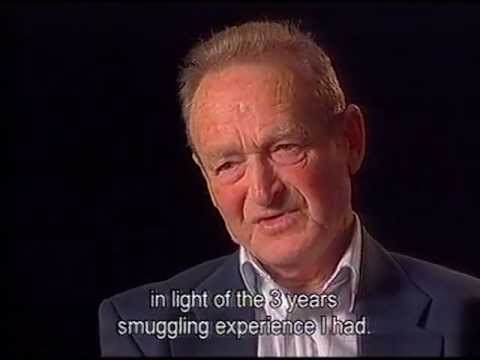 David Plonski (A.K.A “Yorek”) was born in Warsaw, Poland in 1926 to a family of three children. In his early childhood, his family moved to Otwock, a suburb of Warsaw.

With the outbreak of the war, Yorek and his sister — who both looked “Aryan” and spoke fluent Polish — assumed financial responsibility for the family, trading food and goods in the Warsaw markets. In 1940, with the establishment of the Warsaw ghetto, 14-year old Yorek became the family’s sole supporter, smuggling kosher meat into the ghetto, at great peril and with much abuse from Polish youths.

In 1942, the ghetto’s size was reduced; the frequency of aktions increased, and life became progressively more unbearable. Smuggling became increasingly difficult and dangerous (possible only through the ghetto walls), but Yorek continued to smuggle in goods.

On 18 August 1942, Yorek returned to Otwock from “work” to find his parents packing. They told him that they were being sent on one of the transports. His mother began screaming hysterically that he must leave, and pushed him out of the window. Yorek fled his family’s house and never returned. The following day the Jews of Otwock were killed and Yorek never saw his family again.

Yorek escaped to Warsaw and slept in the cemetery. There he met Dr. Levy Wilwesky, who organized a group of underground fighters. Yorek was recruited as a gofer, responsible for purchasing and smuggling weapons and ammunition, and transmitting information.

In April 1943, on the eve of the Passover, a member of the Polish underground notified Wilwesky’s group that German troops were approaching the Warsaw ghetto for the purpose of final liquidation. Upon entering the ghetto, the German forces were attacked by Jewish underground fighters. The fighting continued for several days; the ghetto was razed and many Jews killed. The remaining members of Wilewsky’s group hid in a bunker.

On 11 May 1943, the Soviet army bombed Warsaw causing Yorek and the remaining members of Wilewsky’s group to escape to the sewers. A while later, Yorek was sent to seek shelter on the Aryan side of the city with one of his friends. During a raid, Yorek’s friend was captured and killed; Yorek escaped, leading his few remaining comrades through the sewers to the Aryan side of the city, aided by the Polish underground.

Soon after, Yorek learned of children who sold cigarettes and newspapers in Three Crosses Square in Warsaw and joined them as a cigarette merchant.

With the outbreak of the Polish revolt in August 1944, Yorek fled to Lublin with forged Aryan papers. After the war he moved to Lodz. He joined Ha-Shomer ha-Tsa’ir movement and helped search for Jewish orphans. In 1948, Yorek made aliyah, and fought in the War of Independence. He joined the founders of Kibbutz Megiddo and met Alexandra, also a Holocaust survivor. They married and had three children. Their son, Eitan, was killed during the Yom Kippur War.

Yorek worked in the archives at Givat Haviva, lectured in schools about his experiences in the Holocaust and accompanied groups of young people on educational trips to Poland. He died in 2010.