Otto Dov Pressburger lit one of six torches at the State Opening Ceremony of Holocaust Remembrance Day at Yad Vashem in 2013. 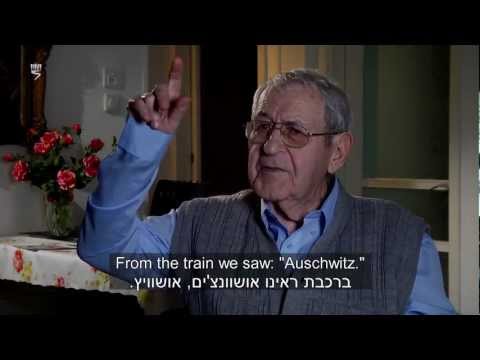 Otto Dov Pressburger was born in 1923 in Trnava, Czechoslovakia, to Sidonia and Geza. He had four siblings. In April 1942, Otto, his father and his older brother Yulios were deported to Auschwitz. His brother Latzi was murdered at Majdanek. His mother and grandmother were also killed.

Otto and his family were among the first Jews to arrive at Auschwitz. His prisoner number, 29045, was tattooed onto his chest. His father was murdered three weeks later.

Otto and Yulios witnessed the Germans' first gassing experiments. Next to the experiment shed was a pit, which Otto helped dig, into which the victims of the experiments were thrown – dead or alive. After a while, Otto and the other prisoners were ordered to burn the bodies. A few weeks later, Otto saw Yulios at one of the selektions. He waved him goodbye and never saw him again. Otto used his fluency in German to survive encounters with SS officers. He was then transferred to Birkenau, where he took part in building the prisoner barracks and the crematorium, and witnessed mass gassings.

In July 1942 Otto's brother, Aladar, arrived on a transport from Czechoslovakia with his wife and daughter, but he didn't recognize the gaunt Otto. Only when Otto sang a family childhood song did Aladar believe it was him. A few days later, Aladar and his family were murdered. Helped by a Slovakian Jewish friend, Otto got a job as a carter, which provided him access to food and supplies. He smuggled provisions from warehouses and from outside Auschwitz into the camp, and helped other prisoners in his block obtain food.

On 18 January 1945, as Auschwitz was evacuated, Otto was loaded onto a train heading for Austria together with Polish prisoners. He jumped from the speeding train on Czech territory, and played dead. He then found refuge at the home of Czech farmers, with whom he stayed until the end of the war. In time, Otto found out that the farmer who saved his life was among the senior members of the Czech underground. When the camp was liberated, Otto weighed less than 30 kilograms.

In 1947, Otto immigrated to Eretz Israel. After being detained at Atlit he joined the Haganah and fought in the War of Independence. In Israel, Otto was reunited with his brother, Alexander, who had immigrated in 1938. Otto and his wife Bracha have two children and five grandchildren.