Dina Ostrover lit one of six torches at the State Opening Ceremony of Holocaust Remembrance Day at Yad Vashem in 2013. 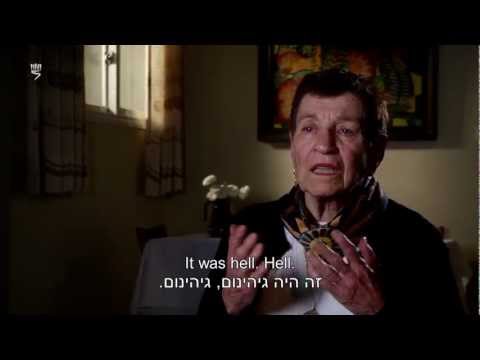 Dina Ostrover was born in 1923 in Stryi, Ukraine as Donia Pickholz, the youngest of four children in an Orthodox Jewish home.

In June 1941, the Germans captured the area and the Jews were concentrated in a ghetto. In September, nearly 1,000 Jews from the city were murdered in a nearby forest. Donia was sent to work in a leather processing factory. The factory manager allowed her to set up a vegetable garden behind the factory, and thus Donia was able to sneak a few vegetables to her family.

In September 1942 some 5,000 Jews were expelled from the ghetto to the Belzec death camp. In the second Aktion in October 1942, the Germans discovered her family in hiding, and they were loaded onto cattle cars. During the journey, Donia’s father encouraged her to jump from the moving train. She lost consciousness in the fall, but fortunately landed behind a bush that concealed her. She returned to the ghetto psychologically broken.

Donia's uncle managed to procure a counterfeit Ukrainian birth certificate for her, and Donia stole out of the ghetto incognito. She found work as a laborer at an inn which served German officers next to the town of Bolechow, not far from Stryi.

In June 1943, the Germans announced another Aktion. Donia knew that a Jewish accountant, Shlomo Reinhartz, and his wife Miriam were staying at the nearby camp. Just 17 years old, Donia proposed to Marika, a fellow working staying at the inn, that the two of them offer to hide Shlomo and Miriam. The couple took shelter in a low-ceilinged attic, above a bathroom used by the Germans.  Each day, for 13 months, Donia smuggled food to the couple and removed their waste. Shlomo and Miriam stayed in hiding until liberation in July 1944. It was only then that Donia and Marika revealed their Jewish origins to one another.

Back in Stryi, Donia learned that she was the only survivor from her entire family.  After living at a DP camp in Germany and then in Italy, she made her way to Eretz Israel. During eight months at a detention camp in Cyprus she met and married Yosef Ostrover. Upon immigrating to Israel in 1949, Donia reverted to her Hebrew name, Dina.

Dina and Yosef, z"l, have two children and two grandchildren.