Abba Naor lit one of six torches at the State Opening Ceremony of Holocaust Remembrance Day at Yad Vashem in 2018. 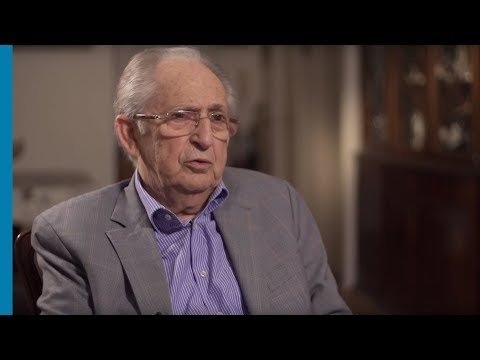 Abba Naor was born in 1928 in Kovno, Lithuania. In August 1941, two months after the German invasion, the Kaunas ghetto was sealed, with the family imprisoned inside. His older brother Chaim was caught looking for food and murdered at the Seventh Fort, a killing site on the outskirts of the city.

Abba and the rest of his family survived several Aktionen. When his parents were at work, Abba would practice hiding his six-year-old brother Berale in a kiln. Berale thus escaped the Children’s Aktion in March 1944, but the family was then transferred to the Stutthof labor camp in July, where they were separated. His father, Zvi-Hirsch, was taken to perform forced labor at a sub-camp of Dachau. Berale and his mother Chana were deported to Auschwitz. "The moment I saw my mother and brother heading towards the train, I realized that was it," recalled Abba. "I could say 'goodbye' forever."

Abba was put to work in construction at a satellite camp of Dachau. To this day, he has stayed in touch with fellow prisoners from the camp, childhood friends from Kovno. Early in 1945, the Germans asked for volunteers to build subterranean bunkers at the Kaufering labor camp. Mistakenly believing his father was in Kaufering, Abba volunteered. On 24 April, the prisoners were taken on a death march without food or water, in rain and snow, eating grass along the way. On 2 May, they woke up in a forest with their German overseers gone. Suddenly they saw American soldiers, who told them they were free.

A few months later, Abba and his father were reunited at a DP camp near Munich. They moved to Poland, and in 1946 he attempted to immigrate illegally to Eretz Israel. After detention by the British in Cyprus, he reached his destination in 1947. He fought in the War of Independence and later worked in the General Security Service, the Weizmann Institute and the Mossad. From 1984-1985, Abba was a proud participant in "Operation Moses," during which some 5,000 Ethiopian Jews were brought to Israel by plane and ship from refugee camps in Sudan.

Abba still delivers lectures at German schools about his experiences during the Holocaust, and participates in Dachau- and Holocaust-related ceremonies in Bavaria. He is Vice President of the World Organization of Former Prisoners of Dachau.

Abba and his late wife Lea have a son, a daughter, five grandchildren and eight great-grandchildren.