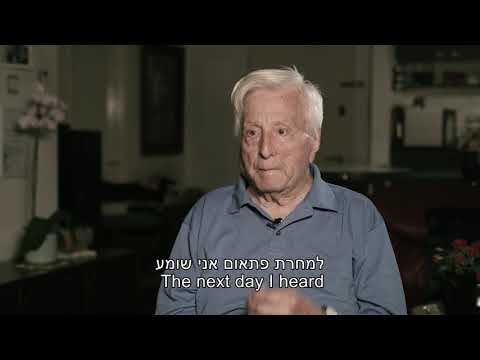 Shmuel Naar was born in 1924 in Thessaloniki, Greece, to a family of 11 people. His father Shlomo was a journalist for local Jewish newspapers. Shmuel attended the Jewish school in Thessaloniki, and later the Alliance High School, but he did not get to complete his studies there. In the spring of 1941, the Germans occupied Thessaloniki and persecution against Jews began, during which Shmuel's father was brutally beaten. He later died from his injuries. In July 1942, Shmuel witnessed the events of "Black Sabbath": "Thousands of Jewish men were taken to a square near the port and we were forced to stand in the summer heat all day long." Thousands were taken for forced labor and hundreds of Jews were murdered.

In early 1942, the city's Jews were confined in the Baron Hirsch ghetto, and in March 1943 they were deported, mostly to Auschwitz. After eight days of traveling in crowded and airless carriages without water or toilets, Shmuel arrived at Auschwitz. During the selection he tried to join his mother, but was violently separated from her. He was showered and his body hair shaved. When he asked the camp veterans where his family members were, they pointed to the smoke coming out of the crematoria. "I have never done anything bad to anyone," he thought. "My only sin is that I am a Jew."

Shmuel survived a year in Auschwitz, almost completely isolated from any Greek or Ladino speaker. Because the orders were given in German, he found it difficult to understand them, and was beaten constantly for "evading work." He managed to impersonate a barber, then a locksmith, and was eventually hired as an apprentice to a German engineer. "When the Allied planes were bombing," recalls Shmuel, "the German crew would hide. I rarely hid, because I was likely to die anyway."

In January 1945, Shmuel was forced on a death march. He walked in rain and snow, wearing only a thin shirt. He finally arrived at the Bergen-Belsen concentration camp. Prisoners were not provided with food, and typhus raged. Bodies were piled up everywhere, with nowhere to bury them. In April 1945, he was liberated by the British Army. "I could not be happy," says Shmuel. "I already felt like I was dead."

Shmuel returned to Greece and began looking for relatives, but his entire family had been murdered in the Holocaust. In November 1945, he boarded the Berl Katzenelson illegal immigrant ship bound for Eretz Israel (Mandatory Palestine). As the ship approached land, a British destroyer discovered it. A Mossad escort of the ship instructed the immigrants to swim to shore if they could, to avoid being taken to a detention camp. When Shmuel heard the word "camp," he immediately jumped into the icy water and swam to shore.

Shmuel fought in the War of Independence in the ranks of the Givati ​​Brigade, on the Negev front. "Being alone in the world, it would not be terrible if I was killed," he told himself. After that, Shmuel fought in all the wars of Israel until (and including) the Yom Kippur War as a combat medic. Shmuel was employed in forestry work by the Jewish National Fund. He then started a small business, where he worked with his wife until the age of 90.