Artemis Miron lit one of six torches at the State Opening Ceremony of Holocaust Remembrance Day at Yad Vashem in 2012. 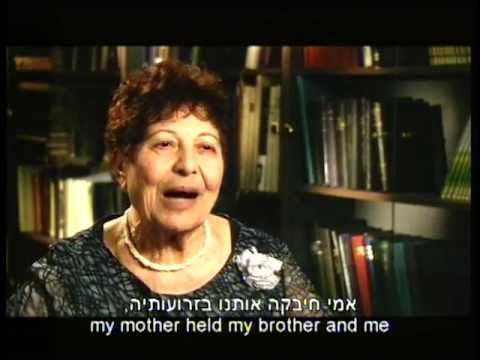 Artemis Miron, daughter of Eftihia and Iosiph-Pepo Batis, was born in 1928 in Ioannina (Janina), Greece.  Her brother, Solomon-Makis, was six years younger than her.

In the summer of 1943, the Germans entered Greece. One night in August 1943, SS men stormed the Batis' house, robbed their money and arrested Iosiph. He and Artemis' grandfather were shot to death two weeks later, as an act of vengeance for the activities of the Greek resistance movement.

On 25 March 1944, the city's Jews were deported to Larissa. After eight days of detention, they boarded an overcrowded cattle train. For the next eight days they were not given any food. The train stopped three times; long enough to empty out the latrine buckets, refill the water containers, and move the bodies of those who had died en route to the car carrying corpses.

On 11 April, Artemis, Solomon and Eftihia arrived at Auschwitz. Because of a fur coat her mother had given her, Artemis looked older than her age and was ordered to join the rows of young women selected for forced labor. That was the last time she saw her mother and brother.

Artemis was put to work outdoors, in all weathers. Her feelings swung between despair and optimism: she almost lost her will to live, but nurtured a shred of hope that she may one day find her father amongst the living.

In January 1945, Artemis was sent on a death march to Ravensbrück, and later to Malchow, where she was put to work at a military factory. In early May 1945, the Allies liberated Malchow, and Artemis returned to Greece, assisted by the JDC. Upon arriving in Athens, she learned that her father had been killed by the Germans before her deportation to Auschwitz. Artemis was taken in by her paternal uncle, and completed her high-school studies.

In 1946, Artemis sailed for Eretz Israel. After detention at Atlit, she went to live with her maternal uncle in Jerusalem. She worked in a number of managerial jobs and guided tours in Hebrew and Greek until her retirement.

Artemis volunteers at Yad Vashem translating testimonies from Greek to Hebrew, and tells her life story to students, IDF soldiers and at community centers. She has completed 1,838 Pages of Testimony in memory of the Jews of Ioannina murdered during the Holocaust.

Artemis and her husband Joseph have three children, ten grandchildren and one great-granddaughter.