Yehuda Mimon lit one of six torches at the State Opening Ceremony of Holocaust Remembrance Day at Yad Vashem in 2019. 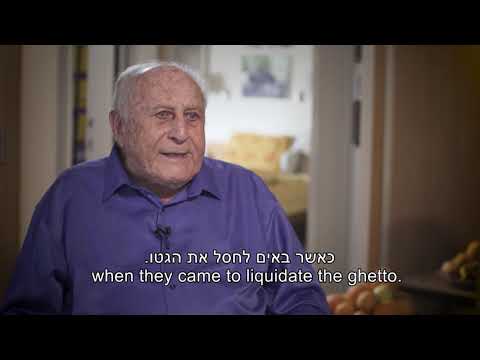 Yehuda Mimon (né Waserman) was born in Krakow, Poland, in 1924. His parents, Sara and Meir, had an older son named Moshe. Yehuda went to the Jewish school and the Hebrew Gymnasium in Krakow, where he was a member of a Zionist youth group.

Late in 1939, some two months after the Germans occupied Krakow, the city’s Jewish schools were closed and formal Jewish education went underground. The children, including Yehuda, were divided into groups of five pupils each and the teachers visited the groups house by house. The youth groups went underground too, teaching them to immigrate to Eretz Israel and holding social events.

In March 1940, Yehuda joined the Akiva youth group and kept up his activities even after the Krakow ghetto was established in March 1941. In the summer of 1942, he joined the pioneer underground group Hehalutz Halohem (The Fighting Pioneer). He was in charge of signaling for the command center, and he performed various missions on the orders of Aharon "Dolek" Liebeskind and Shimshon Draenger. The dangerous actions that he carried out included sneaking Hehalutz Halohem operatives into the ghetto.

Yehuda’s mother and brother were transferred to the Plaszow labor camp, where Sara was murdered. Yehuda's father was murdered at Belzec.

On 22 December 1942, Yehuda and other resistance members received orders to aid in an assault on the Cyganeria café in Krakow, where German soldiers gathered. German soldiers and officers were killed in the attack, which reverberated throughout Poland.

During another bold operation, the Germans arrested Yehuda. He was imprisoned and deported to Auschwitz in April 1943. There, he labored in a workshop and joined the camp's communist underground. In 1996, the President of Poland awarded him the honorary Auschwitz Cross for his resistance activity in Auschwitz.

On 18 January 1945, Yehuda and five of his comrades escaped the death march from Auschwitz and went into hiding until they were liberated. He returned to Krakow thereafter, and became active in the Bericha organization, which smuggled Jewish refugees into Eretz Israel. In June 1946, Yehuda immigrated to Eretz Israel with Aviva Lieberman, whom he later married, aboard the Josiah Wedgwood. He served in the Israel Navy after the state became independent.

In 1963, Yehuda was sent to Poland as First Secretary of the Israeli embassy in Warsaw, and in 1968 he was reassigned to Vienna as special envoy for Polish and Soviet Jews who wanted to immigrate to Israel. While serving abroad, he adopted the Hebrew surname Mimon. In 1972, Yehuda completed his military service with the rank of lieutenant colonel, and he opened a chip processing plant in the Haifa Bay after he was discharged. In 1995, he was honored by the city of Haifa.