Zvi Michaeli lit one of six torches at the State Opening Ceremony of Holocaust Remembrance Day at Yad Vashem in 2014. 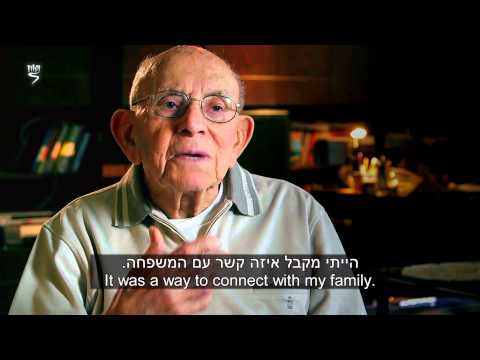 Zvi Michaeli was born in Thessaloniki (Salonika) in 1917, as Simantov (Saby) Mahel. His father Shimshon was a trader and building contractor, his mother Esther a homemaker. Zvi had three older sisters as well as a younger brother, Tsadiko. Zvi attended a French school; his knowledge of French would eventually save his life.

On 11 July 1942, a fateful day later known as "Black Sabbath," all Jewish men aged 19-45 were ordered to appear at Freedom Square in downtown Salonika. Zvi was among the 9,000 Jews made to stand in his Shabbat clothes under the blazing sun, sustaining humiliation and beatings from German soldiers. Salonika Jews were then ordered to wear yellow badges on their clothing; they were forced out of their homes and their property was confiscated.

On 7 April 1943, Zvi's family was deported to Auschwitz. It was the last time Zvi saw his brother Tsadiko. Although he never gave up hope of finding Tsadiko, in 1997 Avi filled out a Page of Testimony in his memory. At Auschwitz, Zvi was separated from the rest of his family; his parents and two older sisters, Myriam and Eleonora, were murdered that day. His sister Julie was killed some four months later. Zvi was transferred to the Buna Monowitz camp (Auschwitz III) and put to various kinds of backbreaking labor.

In February 1944, Zvi fell ill and was sent to the hospital in Auschwitz. Thanks to his knowledge of French, he befriended Dr. Shymon Lubitz, a Polish Jew who had studied medicine in France and who saved him from the gas chambers.

In January 1945, Zvi was sent on a death march. He and other prisoners were marched on foot to the Gleiwitz train station in eastern Germany and then rode in open train carriages for nine days to Dora-Mittelbau. Zvi had managed to preserve some 20 photographs of his family and friends, but in March 1945, when he was imprisoned at the Ellrich camp in Germany, the photographs were discovered and confiscated.

On 8 April 1945, Zvi arrived in Bergen-Belsen in a state of severe malnutrition. On 15 April, the camp was liberated by the British army:  "I had no strength to cheer. I was too weak to rejoice and too tired to be excited." Zvi was hospitalized in Celle, and then taken to Sweden for rehabilitation. On the ship to Sweden he met his future wife, Elvira, a fellow Auschwitz survivor. In November 1949, the couple arrived in Israel.

In the early 1990s, Zvi began accompanying groups of schoolchildren traveling to Poland to tell his story. He also gives lectures to students and IDF soldiers about his life during the Holocaust.

Zvi and Elvira, z"l, raised a daughter and have three grandchildren.