Leo Luster lit one of six torches at the State Opening Ceremony of Holocaust Remembrance Day at Yad Vashem in 2010. 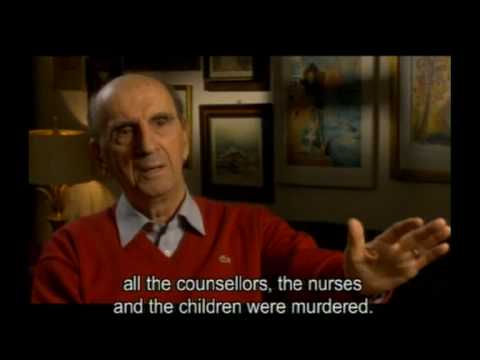 Leo Luster was born in 1927 in Vienna, Austria, to a traditional Zionist Jewish family. He was the second child of Moshe, a textile merchant, and Golda. During the Kristallnacht pogrom Leo's father was arrested, but was released a few days later, beaten and bruised. Meanwhile, their neighbor had commandeered their apartment, forcing them to move to a tiny, mildewed apartment in the basement of their building. In 1940, Leo’s sister, Haya, managed to emigrate illegally to Mandatory Palestine.

In January 1945, Leo was forced on a death march. At the Blechhammer camp, when many prisoners refused to attend roll call, the Germans set fire to the barracks and shot at anyone who fled. Luckily Leo and his friends had been put in a shed storing bottles of seltzer, and they managed to put out the flames. A few days later, Leo went outside to look for food. In one bunk he came across an SS officer shooting anyone in sight. Leo saved himself by diving into a pile of bodies.

One day Leo and a friend dared to flee the camp. Hearing the sound of approaching vehicles, they escaped to the nearby woods. On one car, Leo noticed a red star. He emerged from the trees, pointed to himself and yelled, “Zhid, Zhid!” (“Jew, Jew!”) A Russian officer stepped out of the car and answered in Yiddish, “I too am Jewish.”

After the war Leo found his mother Golda in Theresienstadt. They returned to his childhood home in Vienna, but nothing remained. They then moved to the Deggendorf DP camp in Bavaria, where he managed to track down his sister’s address in Eretz Israel.

In 1949, Leo and Golda immigrated to Israel and were reunited with Haya. Leo started working as a driver, and later became an employee of the Austrian Embassy, where he worked until his retirement in 1991.

Leo is a founding member of the Association of Former Austrians in Israel. He helps Holocaust survivors claim reparations, pensions and other entitlements from the Austrian government, and is also involved in the commemoration of Austrian Jews murdered in the Holocaust.

Leo and his wife Shoshana have a son, a daughter and three grandchildren.