Miriam Liptcher lit one of six torches at the State Opening Ceremony of Holocaust Remembrance Day at Yad Vashem in 2013. 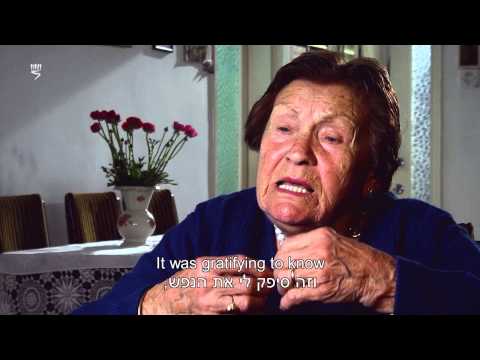 Miriam Liptcher was born Manya Wagman in 1922 in Krakow, Poland. She had seven siblings. With the German conquest, her family moved to the town of Proszowice. Miriam and her brother Joseph disguised themselves as Aryans. Their father acquired food from farmers and they traveled by train to Krakow to smuggle provisions into the ghetto. One day, Miriam was reported to a German officer by a Polish acquaintance. From that day on, Miriam never saw her family again. On the train on her way to the prison, Miriam pushed the informer out of the car.

In May 1942, Miriam was deported to Auschwitz. She decided to help her fellow female prisoners as much as possible. She warned them not to complain about sickness, and when they were ordered to turn the earth over with their hands, she convinced them to eat roots for their nutritional value. Miriam sorted objects belonging to Jewish inmates and victims, and at every opportunity ripped the clothing so the Germans could not use it. When she was sent to bring water, she filled the jugs with clothing for the Yugoslavian prisoners. At nights, she snuck into another camp, and in exchange for clothes she procured a little food. When she was caught in these smuggling attempts, she was sent to work cutting plant overgrowth in a lake of frozen water.

At the end of 1943, many of Miriam’s friends from her youth group in Krakow came to Auschwitz, sick with dysentery. Miriam obtained rice from the Yugoslavian prisoners, cooked it and gave it to her friends. Some of them managed to recover. In the spring of 1944, she was transferred to the experiment shed of the infamous Josef Mengele. The experiments she endured there rendered her barren.

In January 1945, Miriam was put on a death march to Bergen-Belsen, where she was liberated in April 1945. She discovered that she was her family's only survivor. On "Kibbutz Buchenwald" she met Rudy Liptcher, also a Holocaust survivor, and they decided to immigrate to Eretz Israel. After being detained at Atlit, the couple went to Kibbutz Afikim and then to Pardes Hanna. In 1963, they adopted a little girl. When she was just four years old, Rudy passed away, leaving Miriam to raise her alone.

Throughout the war, Miriam managed to save a golden ring from her mother, bearing her initials "M.W." Miriam still wears the ring. For many years, Miriam accompanied groups to Poland as a witness. She told the story of the Jews of Proszowice and has joined the “March of the Living" many times. Miriam has a daughter and three grandchildren.