Eliezer Lev-Zion lit one of six torches at the State Opening Ceremony of Holocaust Remembrance Day at Yad Vashem in 2012. 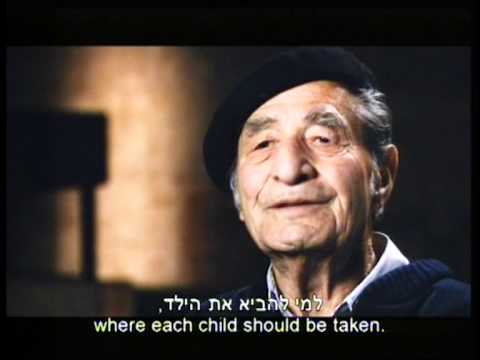 Eliezer Lev-Zion was born in 1927 in Berlin, Germany, as Oskar-Eliezer Lewinsohn. His father, Nathan, was a journalist, and his mother, Franscheska, a doctor who managed a Jewish orphanage. A month after the Nazis came to power, Oskar's father was arrested and disappeared. Heavily pregnant, Franscheska fled to France together with Eliezer, settling in Lyon. A month later, Eliezer's brother Marcel Gideon was born.

In the winter of 1939/1940, the three family members were taken to a detention camp in Ardèche. Eliezer was released four months later, and that summer joined a Jewish religious scouts group, which instilled in him a love of a Zionism and agriculture.

In November 1942, the Germans occupied southern France, and Eliezer was arrested for holding counterfeit identification documents. After his release, he joined the Jewish underground. He was sent by Father Alexandre Glasberg, head of a refugee organization, to smuggle children out of a French detention camp. Eliezer would meet up with Father Glasberg, who handed children to him over the barbed wire, and then take them on his bicycle to a hiding place. In this way, he helped save 36 children. Father Glasberg was later honored as Righteous Among the Nations.

For three and a half years, Eliezer wandered from place to place. Traveling to a town near Montauban, he registered with the city council as an Alsacian, and started working in carpentry.  Soon, he was recruited as a translator by the SS. He transferred the information he obtained to the French Resistance.

In February 1944, Eliezer met his mother and brother in Grenoble – but the Gestapo stormed their meeting place and seized Franscheska and Marcel. Eliezer managed to escape but his brother and mother were deported and murdered in Auschwitz.

After liberation, Eliezer returned to Lyon in search of relatives, but found none. He went to Paris, where he worked locating Jewish orphans and preparing them for aliyah.

In 1946, Eliezer sailed for Eretz Israel. After fighting in the War of Independence, he established a farm. He has also worked as an agriculture instructor, acclimatizing plants, and managed greenhouses and forest-planting projects of the Jewish National Fund. Eliezer participates in many volunteer initiatives, including the Society for the Protection of Nature in Israel and assisting people with mental disorders. He also established an organization that helps new immigrants.