David Leitner lit one of six torches at the State Opening Ceremony of Holocaust Remembrance Day at Yad Vashem in 2004. 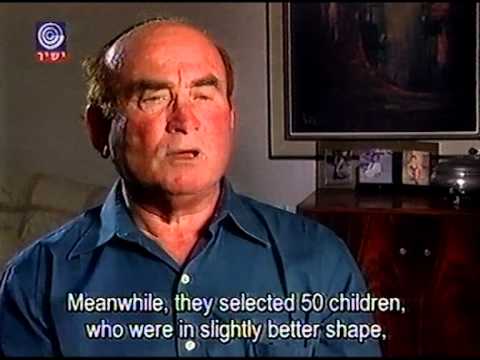 David Leitner was born in 1930 in Nyiregyhaza, Hungary, into a religious family of six. In 1938, his father was drafted into the Hungarian army, returning in March 1944, just before the German invasion. Within a few weeks, local gendarmes had confiscated the Jews’ valuables and herded them into a ghetto. Six weeks later they were taken to the train station, packed into cattle cars and deported to Auschwitz-Birkenau.

At Birkenau, the men of David’s family were separated from his mother and sisters, who were murdered immediately. David’s father and brother were sent to Buchenwald and from there to Bergen-Belsen, while David remained in Birkenau with 40,000 other children. Being tall and strong, David survived further selektions, as well as a severe beating after he was caught trying to escape on one of the transports exiting the camp. On Simchat Torah, David was herded with hundreds of other children to the crematorium. Amid cries of Shema Yisrael and calls for their parents, the children were stripped naked for extermination. Suddenly the process stopped; a group of children was needed to unpack potatoes from a train of supplies that had just arrived. David was among 50 children chosen for the task: they worked amidst the whistle of bullets, as guards shot at them for amusement.

In January 1945, David was transported to Mauthausen where the prisoners were whipped by SS soldiers and left naked in the freezing cold for three days. In April, they were marched through the pouring rain to Gunskirchen, where thousands of them huddled together in a camp of roofless shacks. On 4 May, the survivors discovered that the Germans had fled the camp so David made his way to a nearby town. After six months in hospital, David was strong enough to return to his ruined home. There he found his brother, who told him that their father had died marching from Bergen-Belsen.

Three months later David traveled to Czechoslovakia with the Bricha (Escape) organization, and then to Austria and Italy. In 1949, he sailed to Israel, joining the IDF while still aboard the ship. He settled in Nir Galim, where he met his Israeli-born wife, Sarah. Today David and Sarah have two daughters, ten grandchildren and three great-grandchildren.