Mirjam Lapid lit one of six torches at the State Opening Ceremony of Holocaust Remembrance Day at Yad Vashem in 2018. 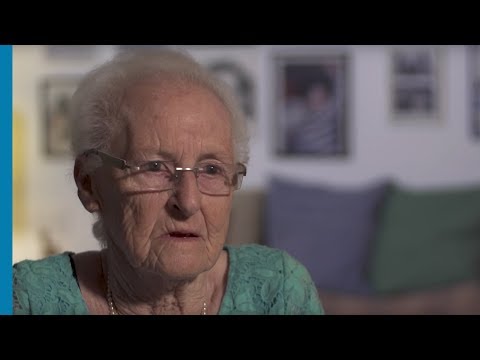 Mirjam Lapid was born in 1933 in Deventer, the Netherlands to a Zionist family. After the Netherlands was occupied, Mirjam had to wear a yellow star and was expelled from school. The Germans confiscated Jewish houses, but a notice on the door of Mirjam’s house stating that she was sick with scarlet fever meant that their house was ignored.

Mirjam’s father Herman Andriesse refused to put his Christian friends in jeopardy by hiding his family with them. In April 1943, they were taken to Amsterdam and two months later deported to the Westerbork detention camp (Mirjam’s oldest brother hid with the Dutch underground).

Working as a cleric in Westerbork, Herman managed to obtain a forged permit for the family to immigrate to Eretz Israel, putting them on the list of prisoners destined to be exchanged.

In January 1944, the family was sent to Bergen-Belsen and imprisoned in a sub-camp designated for prisoner exchanges. The young people in the camp conducted activities for the children and taught them songs in Hebrew. In February 1945, Herman passed away. On 9 April, the prisoners were marched to the railway station. Mirjam's mother Batya, who was sick with typhus, was carried by Mirjam's brother and sister.

The family was put on the "lost train." For two weeks, they traveled around, stopping intermittently and burying the dead. On 23 April, the train’s passengers were liberated by the Red Army on the outskirts of the village of Tröbitz in eastern Germany.

A few months later, Mirjam and her family returned to the Netherlands, where she joined the Habonim youth group. She became a leader in the movement, and served as its secretary in the Netherlands. In 1950, she traveled to Jerusalem to study. When she returned, she joined an agricultural training farm near Amsterdam.

In 1953, Mirjam immigrated to Israel. There she met Aki, and the couple joined a Habonim group from South Africa at Kibbutz Tzora, central Israel. Since 1960, she has run the bureau of the kibbutz’s secretariat.

Mirjam and Aki had six children and 14 grandchildren. When their late son Ran, a helicopter pilot in the Israel Air Force (IAF), was asked to fly the German chancellor during a visit to Israel, he made it contingent on Mirjam’s approval. “Nothing could be greater for me than to have my son, a pilot in the IAF, fly the German chancellor,” she said. “That is my victory.”