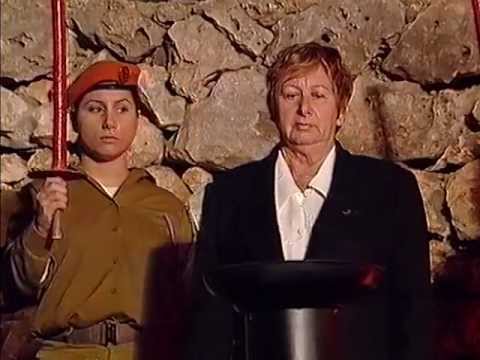 Loti (Nomi) Lang née Zeller was born in 1933 in Sarajevo, to a family of three children. In 1941, following the German shelling of the city and rumors of an imminent German invasion, Loti’s father paid a Muslim acquaintance to take 8-year-old Loti and her 12-year-old brother Miko to his parents’ home in the village. Loti remembers leaving her mother crying at the train station while her father ran frantically buying fruit to shove through the train-car window. That was the last time she saw her parents and eldest brother.

Mid-way through the journey, the family acquaintance let the children off the train and disappeared. Alone, the children agreed to look for their grandparents when daylight broke. Yet to their bitter disappointment, when they finally found the village their grandmother turned them away, sending Miko to a nearby village to shepherd and Loti to a monastery to be cared for by nuns.

After three months Loti was sent back to the village where she wandered around offering shepherding and sock-mending services for food and board. She maintained contact with Miko, sometimes meeting him in the fields. One day Miko announced he was joining the partisans: “When the war is over, I will come back for you. If I do not return — it means I did not succeed.” Despite being left alone, Loti was a strong girl, and under her leadership the village children collected ammunition from a German guard’s post for the partisans.

In 1944, a letter affixed to a photo of Miko was thrown at Loti from a passing truck. In the letter, Miko promised to arrive in two weeks — a promise he kept.

At the war’s end Loti was sent to a Belgrade orphanage and Miko to a dormitory for orphaned students in Breno, Czechoslovakia, to learn a profession. On one of Miko’s visits, he told Loti that their parents had perished and that their older brother’s fate remained unknown.

At 13, Loti returned to Sarajevo and from there continued on to her grandparents’ village. Her grandmother had died but her grandfather welcomed her warmly.

Three years later, in 1948, Miko, Loti, the siblings’ grandfather, his daughter, and Erwin Lang — who had been with Loti in the orphanage and later married her — illegally immigrated to Palestine. Loti and Erwin joined Kibbutz Mishmar Ha’Emek and Miko went to Sha’ar HaAmakim. Following her army service at the nursing school in Tel Hashomer, she dedicated herself to the profession for some 40 years. Erwin and Loti have two daughters and five grandchildren. Miko died five years ago.