Joseph Labi lit one of six torches at the State Opening Ceremony of Holocaust Remembrance Day at Yad Vashem ⁣in 2016. 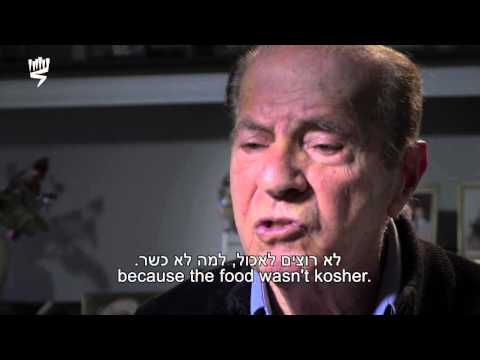 Joseph Labi was born in 1928 in Benghazi, Libya, to a family of 19. He was the grandson of Rabbi Eliyahu Labi, a rabbi and religious court judge in Benghazi. Joseph was a member of the Maccabi Zionist movement.

In 1938, when the Italian racial laws were extended to Libya, Joseph and his fellow Jewish students were transferred to a separate school bearing a Star of David. After Joseph's parents passed away in 1940, Joseph’s married brothers took him and his younger brothers under their wing.

In 1942, Joseph’s entire family was deported to the Giado concentration camp in Libya. The Libyan Jews were then deported to Italy, where they were interned at Castelnovo ne' Monti. In February 1944, the Germans sent them to Bergen-Belsen. At first, Joseph refused to eat because the food at the camp was not kosher, but after a week of hunger, he relented.

One of the camp’s prisoners, a religious Jew, proposed that Joseph have a bar mitzvah ceremony. "I put on tefillin," said Joseph. "He asked me to share food with those present, but I only had a small potato. Fortunately, a woman secured some perfume. I poured some on everyone’s hand and that was my bar mitzvah."

Joseph was transferred to France in a prisoner exchange deal in March 1945, and from there he made his way to Spain and Portugal. "When we reached Lisbon, we realized that that hell was over for us."

On returning to Benghazi, Joseph met soldiers from the British Army’s Jewish Brigade who suggested that he come to Eretz Israel. "I went to the train station. Somebody gave me a hat and dressed me in a Jewish Brigade uniform and put a bunch of forms in my pocket," said Joseph. "I boarded the train dressed as a soldier and we went to Alexandria.”

After being smuggled into Israel, Joseph lived on several kibbutzim, volunteered for the Palmach, and fought in Israel’s War of Independence. He and his wife Yvonne have a son and daughter, seven grandchildren, and a great-granddaughter. He still has the tallit that he received at his bar mitzvah ceremony at Bergen-Belsen.