Dita Kraus lit one of six torches at the State Opening Ceremony of Holocaust Remembrance Day at Yad Vashem in 2014. 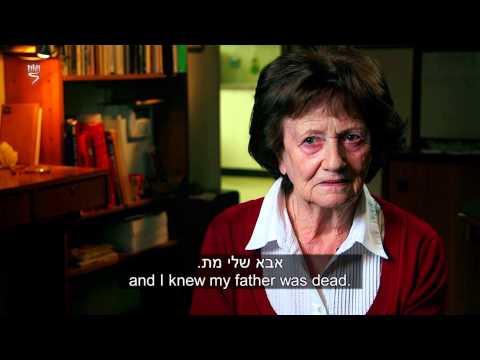 Edith (Dita) Kraus (née Polach) was born in 1929 in Prague, a single child of law professor Dr. Hans Polach and his wife Elisabeth. When Germany occupied and annexed de facto the Czech lands (calling them "the Protectorate of Bohemia-Moravia") in March 1939, Dita's father was fired from his job. In September, as Germany invaded Poland, Dita's parents sent her to the countryside, "till the storm blows over," but in 1940 brought her back to Prague and set up private tutors for her.

In November 1942, Dita and her parents were deported to Terezin. Dita was placed in a separate block for young girls and assigned to agricultural work. At the end of the working day she would often visit her grandmother, Katharina.

Despite extremely crowded living conditions, sparse food and heavy workloads, the ghetto maintained a broad variety of educational and cultural activities, including lessons and lectures. Among the teachers was Fredy Hirsch, a charismatic sports instructor whom she had met in Prague. Hirsch organized sporting events and educated his students in the spirit of human values, mutual responsibility and pride their Jewish identity. Among other activities, Dita sang in an opera production staged in the ghetto and took classes with Friedl Dicker-Brandeis, a talented painter who encouraged the young girls to express their feelings through art.

In December 1943, Dita and her parents were sent to Auschwitz and placed in the camp for Czech families at Birkenau. Dita's mother soon took ill and was put in isolation. Six weeks later, Dita's father died, and it fell upon Dita to notify her mother by "shouting the bitter news to her through the wall."

Dita served as librarian in the block set up for children in Birkenau, with only a handful of books. Fredy Hirsch also ran the children's block, creating a network of Zionist instructors who filled their young charges' time with educational and cultural activities. One of these young educators was Otto (Ota) Kraus, Dita's future husband.

In March 1944, half of the children living at the children's block were murdered, and their beloved Fredy Hirsch also died. In May, Dita and her mother were sent to Hamburg, Germany, where they were put to back-breaking labor. From Hamburg, the two women were transported to labor camps, and then in March 1945 to Bergen-Belsen, which was liberated several weeks later by the British Army.

Following her mother's death in June, Dita returned to Prague, where she was reunited with her aunt, her grandmother (who had survived Terezin), and Otto Kraus. The two married and began a family, and in 1949 immigrated to Israel with their eldest son. For some 30 years, both Otto and Dita taught at the Hadassim Youth Village.

Dita and Otto raised three children. They have four grandchildren.