Zvi Kratz lit one of six torches at the State Opening Ceremony of Holocaust Remembrance Day at Yad Vashem in 2004. 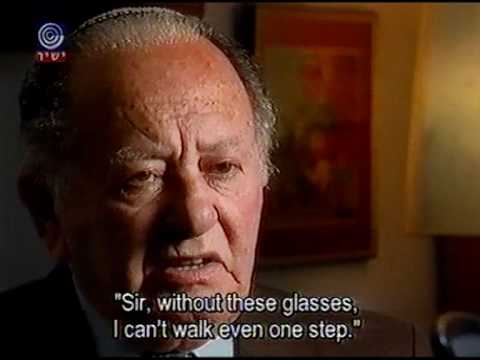 Zvi Kratz was born in 1924 in Chust, Czechoslovakia, into a religious family of six. Following the Nazi invasion in March 1939, all Jewish children were expelled from school, and Zvi worked to help support his family.

Zvi was transported to Auschwitz-Birkenau in June, with the other Jews of Chust. After a three-hour wait in the cattle cars while Jews from the previous transport were being exterminated, Zvi and his father Avraham were separated from his mother and three brothers, who were sent straight to the gas chambers. The next day, Zvi persuaded his father to sign up for work with him. They remained in Auschwitz for a few more days where Zvi found Pnina, his sweetheart. They pledged to meet after the war.

Zvi and his father were sent to work in a labor camp inside the destroyed Warsaw ghetto, tearing down the ruins to reclaim the building materials. In the summer of 1944, after the Polish uprising, the prisoners were evacuated to Dachau — an exhausting 13-day journey in which many prisoners died. Zvi and his father were placed in Kaufering 7 — a secondary camp of Dachau — where the prisoners lived in dugouts and performed hard labor. Two months later, typhus swept through the camp, killing more than half the prisoners. Zvi’s father who died in his arms in February 1945, two months before liberation. Zvi also fell ill, but a week later all the prisoners, including the sick, were forced on a three-day march to Allach.

Lying exhausted in his cabin, Zvi soon heard cries of joy; the Americans had arrived and liberated the camp. Despite losing his will to live, Zvi was transferred to a hospital near Munich, where he spent a month recuperating. He then returned to Chust, found Pnina and married her. In 1949 they immigrated with their young son to Israel, and settled in Jerusalem, where their daughter was later born. Today Zvi has eight grandchildren and seven great-grandchildren.