Baruch Kopold lit one of six torches at the State Opening Ceremony of Holocaust Remembrance Day at Yad Vashem in 2013. 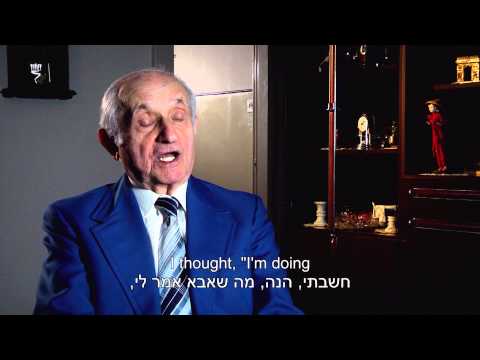 Baruch Kopold was born in 1923 in Iwje, Belarus, the second of five children to Mozes and Hassia.

The Germans occupied Iwje in June 1941, and Baruch was put to backbreaking labor. By May 1942 most of the town's Jews had been shot. After Baruch was forced to cover up the mass graves, he was then deported with his family to the Lida ghetto. With his father's encouragement, Baruch and seven of his friends cut the fences of the ghetto, swam across the half-frozen river and escaped to the forests. The group came upon partisans who refused to accept them without weapons. Later on, they were accepted to Tuvia Bielski's brigade, underwent training, and were issued arms.

"We would organize ourselves into groups and plunder trains and villages for food and provisions," relates Baruch. "We were constantly on the move." The fighters acquired guns from attacks on SS soldiers, or by smuggling from a weapons factory close to Lida where many Jews from the ghetto worked. When the Germans placed a siege on the forest, the partisans dug underground bunkers that they camouflaged with leaves and branches. At night they sung partisan songs, as well as songs in Yiddish and Hebrew about Eretz Israel. Baruch was one of the singers in the company, and he still sings those songs today.

In June 1944, eight of the fighters in the brigade were killed in an encounter with an SS unit. Bielski instructed his people to cross the swamps to another part of the forest. "We all helped each other make it through that exhausting trek," recalls Baruch, "and thus most of the brigade was saved.”

When the area was liberated by the Red Army, Baruch returned to Iwje but discovered that his parents, his brother Yitzhak and his three sisters – Bracha, Bailea and Havva – had been murdered in Majdanek. After escaping from a Soviet work camp, he returned to Poland and joined an Aliyah preparatory group. He led a group of Jews on foot through Czechoslovakia, Austria and across the Alps to Italy. In May 1946 Baruch arrived in Eretz Israel.  During the War of Independence, he was drafted into the Haganah and met his future wife Lea, an Auschwitz survivor. Baruch worked at Bank Leumi until retirement.