Menachem Katz lit one of six torches at the State Opening Ceremony of Holocaust Remembrance Day at Yad Vashem in 2008. 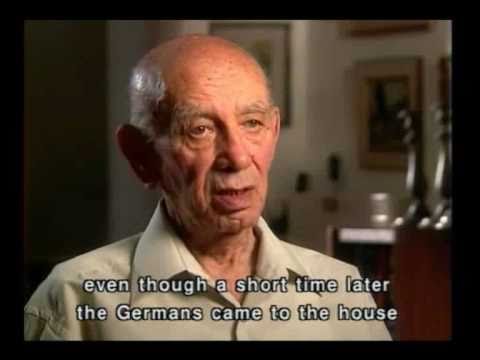 Menachem Katz was born in 1925 in Berezhany, Poland, to a religious Zionist family. When Menachem was an infant, his father died. His mother remarried, and she and her husband Eliyahu had two daughters.

In July 1941, the Germans occupied Berezhany, and Ukrainians and Germans murdered many Jews. In October 1942, the town’s ghetto was established, and on Yom Kippur 1942, hundreds of Jews were deported to the Bełżec death camp. Together with 30 other people, Menachem’s family hid in a secret room in the ghetto, and thus escaped deportation.

In the spring of 1943, the Nazis established a labor camp near the ghetto. Eliyahu and Menachem were taken to a beverage manufacturing plant, where they slept at night. Two weeks later, the ghetto was liquidated. Eliyahu fell into deep despair, and before committing suicide, commanded his stepson to “be strong.”

Wounded while escaping from liquidation at a local cemetery, Menachem hid in a wheat field and eventually reached the house of a farmer he knew. A few days later, his mother and younger sister arrived. The Polish farmer, Piotr Kmiec, hid them together with Shimshon Fogelman’s family. When Kmiec was murdered, his wife Anna continued to hide them, even though the farmhouse was occupied by German soldiers. Piotr and Anna Kmiec and their two daughters were later recognized by Yad Vashem as Righteous Among the Nations. In the spring of 1944, the families fled, this time into the forest, where they remained until the liberation of Berezhany in July 1944.

Two years after liberation, in October 1946, Menachem, his mother and his sister Rina sailed for Eretz Israel, eventually reaching its shores in 1947. Menachem studied architecture at the Technion in Haifa. He won many prizes in his field, published a book on architecture, and designed the museum at Kibbutz Baram in memory of the Jews of Berezhany. Menachem also initiated the renovation of the Atlit internment camp and voluntarily designed the reconstructed camp. He is active in the Berezhany Immigrants Association, and he published a book commemorating the Jews of Berezhany. He is currently working on restoring the Berezhany synagogue.

Menachem is married to Chanah. They have two sons and six grandchildren.