Sara Kain lit one of six torches at the State Opening Ceremony of Holocaust Remembrance Day at Yad Vashem ⁣in 2016. 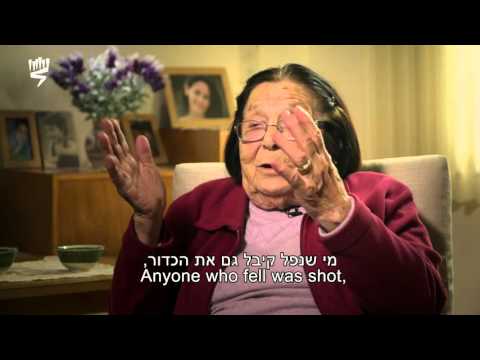 Sara Kain (née Izikowich) was born in 1919 in Kassa (Košice), Czechoslovakia, to a religiously traditional family of eight. Her parents owned a pâtisserie, where she and her siblings worked. Her older siblings Rachel and Meir immigrated to Eretz Israel before the war.

In 1938, the region where Sara lived was annexed to Hungary. In April 1944, a month after the Germans occupied Hungary, the Jews of Kassa and the neighboring towns were concentrated into a ghetto. In May, they were transferred to a brick factory. Sara, her sister Ethel and her parents were deported to Auschwitz in early June 1944.

On arrival at Auschwitz, Sara’s parents were led to the gas chambers. The girls were processed as inmates at the camp. On discovering their fate, Sara wept bitterly: "In an instant, I realized that I had no one but my sister."

Sara suffered from numerous sicknesses in the camp. At one roll call, Ethel was selected for the gas chambers. With help from acquaintances, Sara managed to get Ethel back.

In the winter of 1944-1945, Sara and Ethel were transferred to Bergen-Belsen in open-door cattle cars in the snow. From there they were taken to Fallersleben, and the next day to the Porta camp, where they worked in a factory that manufactured spare parts for aircraft. A month later, they were sent on a death march to Salzwedel.

In April 1945, the camp was liberated by the US Army. Sara weighed just 38 kilograms (84 pounds). After a period of recuperation, she and Ethel decided to make their way to Eretz Israel, where their brother and sister lived. An American soldier took their personal information and read out their names on the radio. A member of Kibbutz Gan Shmuel was listening to the broadcast and told their sister Rachel, a member of the kibbutz, that they had survived.

When Sara and Ethel reached Prague, an acquaintance told them that their brother and sister, Yosi and Miriam, were in Budapest. They went to Budapest, met Yosi, and told him that his wife and two children had been murdered. On their return to Kassa, they discovered strangers living in their house. They managed to find their father’s kiddush cup and their mother’s scarf; the family has kept these artifacts to this day.

In June 1946, Sara, Ethel and Miriam reached Israel. After being detained by the British at Atlit, they made their way to Gan Shmuel.

Sara married Abraham, z"l, whom she had met as a girl in Kassa. The couple has three children, ten grandchildren, and 14 great-grandchildren.