Moshe Jakubowitz lit one of six torches at the State Opening Ceremony of Holocaust Remembrance Day at Yad Vashem in 2017. 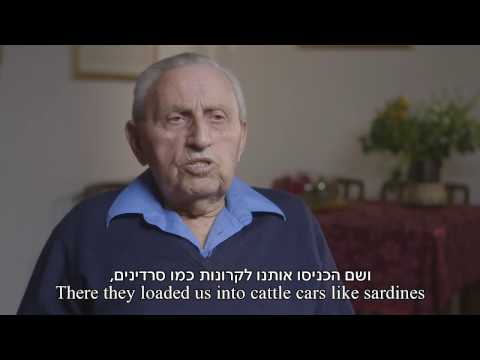 Moshe Jakubowitz was born in Warsaw in 1929 to a Hasidic family, the eldest of three brothers. His father, Jacov-Arie (Leib), worked in agriculture and marketing crops, and his mother Hava ran a grocery store across from the family home. Moshe went to the Tarbut school, where he learned general and Jewish studies.

After the Germans established the Warsaw ghetto, Moshe continued his studies privately, and celebrated his Bar Mitzvah in the ghetto on Simchat Torah. On the eve of the Warsaw Ghetto Uprising in April 1943, the adults prepared hiding places in the basement. “During the Passover seder, we heard gunfire. We went down to the bunker and stayed there for seven days, until the Germans started burning down the ghetto,” said Moshe. “We had no choice. We came out with our hands up. They led us to the Umschlagplatz. On that day, 24 April 1943, my father was murdered.”

Moshe was sent to Majdanek with his mother, two brothers and grandfather. “My mother heard that they were looking for workers, and she urged me to go with my grandfather. I never saw her or my brothers again.” Moshe and his grandfather were sent to a labor camp not far from Lublin, where they chopped trees and built houses. One day, Moshe’s grandfather was taken by truck to the forest along with other workers and shot to death.

During a death march towards Dachau, Moshe managed to slip away and link up with American liberators. Although he received papers allowing him to immigrate to the US, in 1946 David Ben-Gurion came to Frankfurt. “It was close to our camp and I went to hear him. He spoke in Yiddish. I decided to move to Eretz Israel.”

After detention in Cyprus by the British, Moshe finally reached Eretz Israel in April 1948. He fought as part of the Irgun, and later in the IDF during the War of Independence. In civilian life, Moshe became a construction manager.