Sara Israeli lit one of six torches at the State Opening Ceremony of Holocaust Remembrance Day at Yad Vashem in 2010. 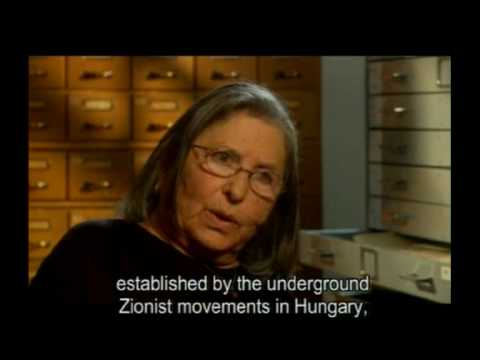 Sara (Kati) Israeli was born in 1937 in Pestszenterzsebet, Hungary (today Budapest), the daughter of Laszlo and Ilus Semjen. With the invasion of Hungary by the Germans in March 1944, Sara’s father was forced to sell his share of the pharmacy he owned to his partner when it became illegal for Jews to own any property.

At the beginning of May 1944, Sara and her family were forced to live in the town's ghetto. At the beginning of June, they were transported to a brick factory in Monor, a concentration camp whose inmates were sent to Auschwitz. However, instead of being taken on to Auschwitz, the family was put on a truck back to a camp on Columbus Street, Budapest. Although she still does not understand why their fate was not Auschwitz like all the other residents of the Pestszenterzsebet ghetto, many years later, Sara found out that her family was supposed to have been put on a train to Switzerland, similar to the so-called Kastner train, but the plan was never carried out. At the beginning of October the camp was dismantled, and the Semjens moved into her grandmother’s apartment.

A few days later Ilus, Sara’s mother, was arrested and imprisoned in Hungary. The family's nanny Gizella (Gizi) Benkovits stayed with the family, bringing them medicines and food, and putting her own life at risk (in 2001, Gizi was honored as a Righteous Among the Nations). When she heard that the entire area was to become Budapest’s central ghetto, Gizi moved Sara, her older brother Ivan, and their cousin Paul to an orphanage established by the Zionist underground movement and the Red Cross. Sara and Ivan survived the war.

Meanwhile, Sara’s father Laszlo was incarcerated in the ghetto. Ilus was sent to Ravensbruck and then to Berlin-Schönholz. After liberation, she returned to Budapest. In September 1945, Laszlo was killed in an accident, making Ilus the family’s sole provider.

With its borders closed by the communist authorities, Sara and Ivan left Hungary illegally as members of the Gordonia Youth Movement, arriving in Israel in December 1949.

Sara grew up and remained on kibbutz, working in various capacities before managing the Kibbutz Guesthouse Association. She also coordinated a group of volunteers who translate Holocaust testimonies from Hungarian into Hebrew. Today she volunteers with an American Jewish genealogy organization, helping preserve archival documents. In addition, she volunteers with Amcha, an organization dedicated to providing emotional support for Holocaust survivors, and visits survivors in their homes.

Sara’s husband Betzalel died many years ago. She has two children and two grandchildren.