Peretz Hochman lit one of six torches at the State Opening Ceremony of Holocaust Remembrance Day at Yad Vashem in 2013. 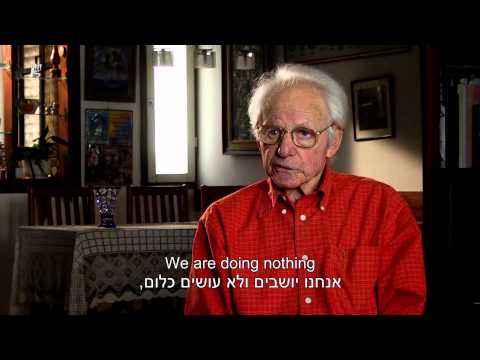 Peretz Hochman was born in 1927 in Warsaw as Pavel, the fourth of eight siblings. With the establishment of the Warsaw ghetto, his older brothers remained outside the walls, while his parents, Peretz and his younger brother Zanek stayed in the ghetto. When the situation in the ghetto took a turn for the worse, Peretz and Zanek escaped to the Polish side, where they posed as Poles and sustained themselves by street singing and selling cigarettes, while smuggling food and clothing to their parents in the ghetto.

Peretz's father, Benjamin, died of hunger in the ghetto and his mother, Miriam, was shot and killed in the summer of 1942. Peretz and Zanek continued to sell cigarettes and newspapers with other Jewish children in the city, hiding at night in stairwells. Most of their customers were Germans, among them SS officers.

When the Warsaw Ghetto Uprising broke out, Zanek was in the ghetto. He was caught and transferred to the Umschlagplatz (deportation plaza). As the Jews were being loaded onto the train, Zanek managed to escape to the Polish section of Warsaw, where he located his brother. Joseph Zhimian, a member of the Jewish underground, gave false identity papers to Peretz, Zanek and a few of their friends, which provided relief for a short time.

On the eve of the Polish rebellion in Warsaw, Peretz and Zanek joined the Polish underground. "Every time they needed someone to perform a complicated mission, I volunteered," recalls Peretz. "All I wanted was to hurt Germans, to take revenge on them. In a sense, something within me was already dead, and therefore I was not afraid of death." After the war, Peretz received numerous decorations for heroism, the highest in the Polish army.

After the rebellion was crushed, remnants of the fighters, among them Peretz and Zanek, were transferred to prison camps in Germany. Upon liberation, they returned to Warsaw, where they found their older brother, Leon.

Peretz and Zanek arrived in Eretz Israel in 1946, and Peretz joined Kibbutz Sha'ar Hagolan. During the War of Independence, he served in the Palmach Brigade of the Negev and was injured. He later worked in manual labor.

A few days before Holocaust Martyrs' and Heroes' Remembrance Day 2013, Peretz Hochman passed away. His widow Sima will light the Torch in his place. May his memory be blessed.