Hedy Hirsch (Engel) lit one of six torches at the State Opening Ceremony of Holocaust Remembrance Day at Yad Vashem in 2006. 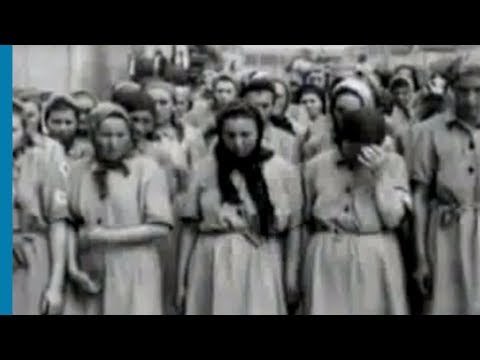 Hedy was born to a religious family in 1927 in Trnava, Czechoslovakia.

With the outbreak of WWII and the German invasion, Jews began experiencing increasing antisemitism. Hedy’s father’s store was expropriated, and on Passover 1942, the Jews were taken from their homes. Hedy and her mother escaped to a shop owned by a Slovak acquaintance, who agreed to hide them in his home. Her father was arrested and sent to Auschwitz. The next day, the women escaped to Nitra, and from there they attempted to reach the Hungarian border. They were arrested by Slovakian guards, but they managed to escape and cross the border. Hedy and her mother reunited with her older sister, Edith, and they traveled together to Budapest using forged papers. Every night they slept in a different location: abandoned buildings, outside, and in cemeteries. They acquired the instincts of hunted animals, their senses honed by living in constant danger. They lived like this for two years.

In 1944, Hedy and her mother tried to re-enter Slovakia, but they were arrested and put on a train to Auschwitz with no food or water. The journey took three days. On arrival, they managed to pass the selection and were sent to Lager C, where they experienced tremendous starvation, frequent selections and labor transports.

In October, 17-year-old Hedy was selected for transport to a labor camp in Altenberg, Germany. Hedy asked the woman in charge of the block, with whom she had become friends, to include her mother on the list. The two were sent to work in an arms factory, where they labored for 12 hours a day. They remained there until April 1945. As the Allies approached, the factory workers were sent on a death march, without any food. On the night of 12 April, they reached Waldenberg, where they were liberated by the Americans. Hedy, her mother and her sister returned to Czechoslovakia. In 1949, Hedy and her mother came to Israel and settled in Jerusalem. Hedy is married and works as an ECG technician. Hedy has four children and several grandchildren.