Chayim Herzl lit one of six torches at the State Opening Ceremony of Holocaust Remembrance Day at Yad Vashem in 2014. 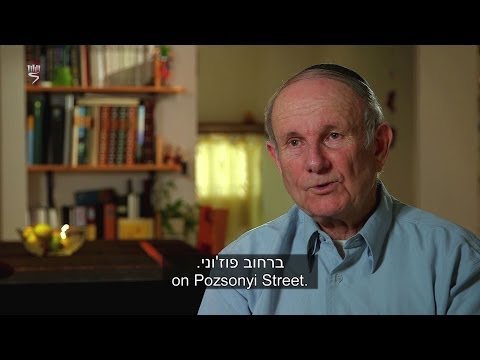 Chayim Herzl (Salgo) was born in 1937 in Budapest, Hungary, the only child of Reuven (Rudolf) and Eugenia (Geni) Salgo, née Herzl.

In 1943, Reuven was taken to a labor camp outside Budapest. "My mother and I went to visit my father at the camp," Chayim recalled. "My hand was small, and I was able to pass some food to him through the fence. That was the last time I saw him. Years later I learned that he had been taken for forced labor as part of the Hungarian army fighting on the Eastern front. He died just days before the end of the war on a POW death march."

When Ferenc Szálasi came to power in Hungary in October 1944, gangs of Arrow Cross militias began murdering thousands of Jews in the streets of Budapest. In December 1944, some 100,000 Jews of the city were concentrated in a ghetto. Chayim and his mother remained outside the ghetto. One night, Arrow Cross men came to their house and took his mother away. Chayim hid under the bed. He never saw his mother again.

Several days later, his aunt Zerel arrived. She and her husband Simson had been given safe haven at the Swiss Embassy in Budapest. Zerel managed to procure documents that allowed Chayim to be admitted to an orphanage, but he refused to go and instead moved with Simson's mother, Golda Gruber, into one of the homes that enjoyed Swiss diplomatic protection through the efforts of Righteous Among the Nations Raul Wallenberg and other diplomats.

In January 1945, some of the Jews living in these protected homes were murdered. "They took us out into a large garden on the bank of the Danube and arranged us in two rows. I was standing in the row closest to the water's edge. The Hungarians and the Germans shot every person standing in that line… An old man told me: 'You are still young, try to run,' and that is what I did… I ran quickly… They shot at me but I managed to get to the back row." The next day, another aktion occurred, but Chayim was placed in the back row. That night, the Soviet Army entered Budapest and liberated the city.

After the war, Zerel and Simson Gruber adopted Chayim. In 1947, he immigrated to Israel and was adopted by his uncle, Simcha Herzl. He became a rabbi and married Dvora, and the couple settled in Kibbutz Sa'ad in southern Israel. Chayim became editor of the Bnei Akiva magazine, and served as the European emissary of the global Bnei Akiva movement, helping new immigrants come to and settle in Israel.

Chayim and Dvora have six children and 19 grandchildren.