Avraham Harshalom lit one of six torches at the State Opening Ceremony of Holocaust Remembrance Day at Yad Vashem ⁣in 2015. 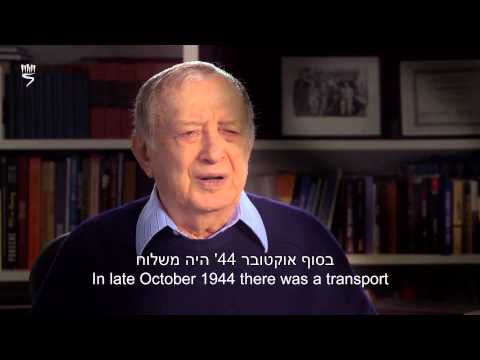 Avraham Harshalom (né Avraham Fridberg) was born in 1925 in the town of Pruzhany in Poland (today Belarus). His parents, Cyra and Mozes, spoke Yiddish at home, but Avraham and his brother Sioma studied at Hebrew-language schools.

In June 1941, the Germans occupied Pruzhany, establishing a ghetto a few months later. In January 1943, the deportation of the Jews of Pruzhany to Auschwitz began. "During the selektion, I said that I was born in 1924 – one year older than I was," recalls Avraham. "I thought it best to pretend I was no longer a boy." His parents and grandmother Ester were led from the ramp at Birkenau to their deaths. Avraham and Sioma went into the camp together; a few weeks later Sioma fell sick and was murdered in the gas chambers.

In June 1944, Avraham escaped Auschwitz with two partners by replacing their prisoners’ garb with civilian clothes and hiding in a pit covered with tin and tobacco so the SS dogs couldn’t sniff them out. A few days later, Avraham and one of his fellow escapees were caught. They were severely whipped and Avraham was forced to wear the round, red patch of a criminal.

In October 1944, some 10,000 inmates were evacuated from Auschwitz. Avraham and his friend took the red patches off their inmates’ clothing and managed to blend in with them. He was sent to a number of camps and eventually was marched to Buchenwald. There he posed as a Pole, and was sent by train to the Leitmeritz and Flossenbürg camps. After a few weeks, the prisoners were evacuated by train. When the train stopped, Avraham and two of his friends ran away, eventually reaching Prague. Seeing a young man and woman at the train station, they took a risk and ran towards them. The man brought them clothes and arranged for them to take refuge at the house of his mother, Jiřina Sobotková. Sobotková was later recognized as Righteous Among the Nations. Avraham hid in the storeroom of a flower shop until the Red Army arrived.

In April 1945, the shop owner recruited Avraham into the Underground. He underwent weapons training and aided the fight against the retreating Germans. After the Red Army liberated Prague in May 1945, Avraham was awarded honorary Czech citizenship and decorated as a hero.

With the passage of the UN Partition Plan on 29 November 1947, Avraham was recruited by Haganah envoys into a flight course with the Czech Air Force. In March 1949, Avraham arrived in Israel, and served in the Israel Air Force during the War of Independence.

Avraham married Rachel and has three children and six grandchildren.