Yaacov (Jacki) Handeli lit one of six torches at the State Opening Ceremony of Holocaust Remembrance Day at Yad Vashem in 2007. 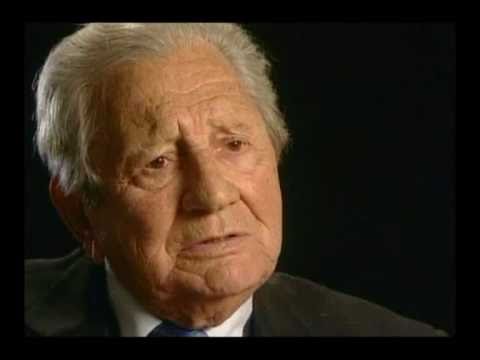 Yaacov (Jacki) Handeli was born in 1928 in Salonika, Greece, to an affluent family of six, whose roots in Salonika dated back to the 16th century.

In 1941, the Germans entered Salonika. They implemented anti-Jewish laws, and turned the Baron Hirsch quarter of the city into a ghetto, into which Jacki and his family were marched, in a humiliating parade. Two weeks later, the family was deported to Poland, with some 85 people crammed into each wagon. After a week, the food and water ran out. Every time the train stopped, the Germans would remove the bodies of those who had died and rob the others of their possessions. It was then that Jacki learnt his first sentence in German: “You won’t need this any more.”

The train arrived at Auschwitz, and the prisoners were sent to the first selection. Jacki and his brothers Yehuda and Shmuel saw their parents and sisters for the last time, and were then taken immediately to carry out different tasks in the camp. Like the other refugees from Salonika, they were unable to speak to the Germans or with other Jews in the camp because they did not know Polish, German or Yiddish. After his two brothers died, Jacki was taken under the wing of Salonika boxer Jaco Razon, who helped him survive the terrible conditions in the camp.

In January 1945, the prisoners were sent on a death march. Jacki remembers the snow-covered road dotted with the blood of those who had been murdered, the march to the Gleiwitz camp, and then onwards to Dora-Mittelbau in open coal trucks, exposed to the cold and the rain, without food or water, until they reached Bergen-Belsen, where they remained until liberation by the British.

In 1947, Jacki immigrated to Eretz Israel. He volunteered in Mahal and fought in the War of Independence. Jacki is the sole survivor of his family. He and his wife Rachel have two children.